Based on his bestselling memoir of the same name, Life Itself explores the impact and legacy of Roger Ebert’s life, from his Pulitzer Prize-winning film criticism at the Chicago Sun-Times to becoming one of the most influential cultural voices in America. Roger himself became an iconic force when he joined with Gene Siskel to create one of the longest running, most influential television shows in history, making Chicago the cultural center of film criticism. The film features candid and insightful interviews with many of the principal producers of the show, along with the first ever feature documentary interview with Siskel’s wife, Marlene.

In the wake of Roger’s illness and disability, Roger’s writing grew creatively and in importance – transcending film criticism. Using his blog, and social media, Roger became a must-read commentator, thoughtfully addressing the political and social issues of our time. His public defiance of cancer and the resulting disfigurement literally and symbolically put a new face on the disease, and brought inspiration to countless thousands in the disabled community and beyond.

Despite his “leave of presence,” his body of work stands as a great populist monument, accessible inspiration for the next generations of film lovers. Life Itself gives a definitive document of the flesh and blood man who forever changed what it meant to be at the movies: Roger Ebert. 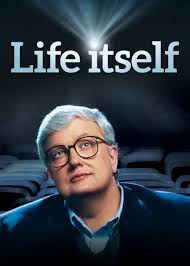 “A big-hearted, absorbing documentary. Anyone who cared about Roger Ebert will find it necessary viewing.”
– Michael Phillips, Chicago Tribune

“Intensely emotional. A life spent at the movies gets the cinematic epitaph it richly deserves. James cuts — as in all of his best work — straight to the human heart of the matter, celebrating the writer and the man, the one inseparable from the other.”
– Scott Foundas, Variety

“A work of deftness and delicacy, by turns a film about illness and death, about writing, about cinema and, finally, and very movingly, a film about love.”
– Geoffrey O’Brien, New York Times