The Wolf House (La casa lobo) is a dazzling, dark fantasy with animation and production technique probably unlike anything you’ve seen before. Combining stop-motion, painting and photography, this exquisitely handcrafted animation feature tells the story of a girl who escapes a cult colony of religious fanatics during Chile’s darkest years under Pinochet. It is not rated but is definitely not for children.

Watching online turns out to be a bonus because the animation is dense and the story is complex, deserving a second screening – which you may have at no additional cost. The Wolf House employs allegory to reference difficult times in Chile during the post-WWII decades, but the highly creative and distinctive visual artistry takes center stage throughout.

They did this because they knew the creative process would be lengthy – they needed 12 shots for each second of footage – and they wanted to share with the public the three-dimensional aspects of life-size models and sets that were in a constant state of evolution.

La casa lobo (The Wolf House) is their first feature-length movie, although they have made other short animated films that explore similar visual and thematic territory, such as  “Los Andes and “Lucia,” since they began working together in 2007.

PREFACE: the historic events described in the following DO NOT take place on-screen, but are shared here to provide context and insight regarding the filmmakers’ inspiration and use of allegory.

In interviews, the directors say their film was inspired by a true story that is well known in Chile but not so much in the United States. After World War II, German émigrés founded an isolated enclave in Chile called Colonia Dignidad.  While famed for its honey, the colony was run by a cult of religious fanatics and sexual predators.

Colonia became infamous for captivity – holding as many as 300 against their will – as well as torture and murder under the leadership of the fugitive German evangelical preacher and pedophile Paul Schäfer.

In the 1970s the Chilean military dictator, General Augusto Pinochet, was familiar with colony and used it as torture camp for dissidents and political detainees from 1973 onward. Learn more in these NYT articles:
Chilean Community, Once a Site of Torture, Reinvents Itself for Tourists and A Film’s Horrors Evoke a Dark Era in Chile’s Past.

“The film is really inspired by some cases of people trying to escape the colony, who were arrested by police and brought back,” [director Cristobal] León said. “This eccentric cult and religious sect became very powerful in Pinochet’s time.”

The Wolf House is a parable, portraying through allegory the growing isolation and whims of those in power. Although the historical context is not articulated beyond the initial minutes that frame the film as propaganda, the constantly shifting and darkening artistic style conveys the face of Colonia Dignidad and Augusto Pinochet’s totalitarian regime as we come to see that the events in Maria’s home in the Chilean wilderness represent life under the dictatorship.

Although The Wolf House was shot in museums in Europe and South America, the film is edited to appear as a virtual single take within a constantly evolving house whose inhabitants continually change.

With their feature debut, the filmmakers draw upon folklore and fairy tales to craft their own visually inventive addition to the genre. The film is a labor of love – and endurance. At 12 different shots per one second of film, it took slightly more than 52,000 shots to create The Wolf House – incredible when considering the amount of time and effort required to construct and dress a multitude of life-sized sets.

There are no computer generated images (CGI), yet the entire film is constantly constructed, deconstructed, and reconstructed over and over again, creating a stop-motion motion world out of papier-mâché, paint, charcoal, paper, tape, furniture and fabric. Different elements load into the frame at different speeds – items in the middle of the room are assembled strand by strand while Maria and her two pigs often appear painted on the wall while also occupying the ceilings and floors.

The effects are awe-inspiring: Ana and Pedro’s hooves turn into hands and feet before they turn into a boy and a girl. Dark-haired Chilean children morph into blonde-haired blue-eyed Germans. We catch a glimpse of a swastika that evolves into a four-paned window.

Characters are built from the ground up, and we see the arduous process of the construction of the characters’ inner frame, then the layering of paper, and finally the painting of the clothes, face, and eyes. Occasionally, an arm will be missing and then created when needed.

The film features 2D and 3D furniture sliding around the floors and walls, two-dimensional drawings morphing into 3D stop-motion figures made out of papier mache and other materials and then undoing them all in the manner of elemental stop-motion animation. Every transformation is accompanied by the sounds of rustling paper, stretched fabric, and a tinkly, music box-like score.

Exquisite, unique, extraordinary, fantastical, intricate and disturbing are terms used by viewers to describe the one-of-a-kind experience provided by The Wolf House.  Enjoy!


The Wolf House begins with a film within a film, archival footage about the Colony, aka Colonia Dignidad, a Pinochet-era German commune in Chile. The narrator explains that this was made to show the world that the Colony was innocuous, centered on the production of honey.

Next, the film shifts from documentary-style prologue to an animated sequence featuring a young blonde girl, Maria, fleeing the Colony to avoid 100 days solitary confinement for letting three pigs escape from the enclave.

There are different ways to process this story:  (1) what unfolds are Maria’s hallucinations as she spends 100 days in dark solitary confinement; or (2) Maria does escape and the story tracks her descent into mental illness. The choice lies with the viewer.

Pursued by a wolf, symbolizing Paul Schäfer, Colonia’s commandant, Maria takes refuge in a cottage in the woods. Because we are looking through her eyes, we don’t see her at first. Then, an animated painting she inhabits changes from black and white to color and from two dimensions to the three dimensions of stop-motion papier-maché puppetry.

Soon she finds two of her escaped pigs hiding in the bathroom. As the cottage and objects in it transform, we see her personality deconstructed, then reshaped as her fevered mind morphs the pigs into dark-haired Chilean children for her to look after.

The unfolding narrative is deliberately mysterious, subtly mixing elements from Grimm’s fairy tales, Red Riding Hood and the Three Little Pigs with darker imagery as the characters, household objects and the cottage itself continue to transform.

Meanwhile, the narrator, in the form of the omnipresent wolf, reminds Maria from afar that she must surrender and return to the colony.  Time passes as Maria feeds and dresses the pigs-now-children, whom she has named Ana and Pedro.  A candle ignites a table cloth and Pedro is burned. Maria pours honey from the colony on Pedro to restore his health.

The honey converts dark Pedro into a blonde version resembling Mara, who also uses honey to transforms Ana into a Germanic blonde. The Nazi heritage of the colony manifests as we watch as the ‘stupid brown’ children become blond and blue-eyed.

Christmas is celebrated with a decorated tree and the three blondes form the German ideal of a Christmas choir lit by the golden glow of a candle, their angelic voices harmonizing. But hunger is a recurring theme and we witness a power shift among the three as Maria finds herself in jeopardy due to the lack of food.

The ending, which returns us to the film within a film, is meant to be happy because the narrator tells us so – but now we know the wolf was never reliable.  There’s more to the overall story, but we are avoiding spoilers; moreover, the storyline is secondary to the visual imagery.

The Wolf House is not scary in a conventional sense. Rather, it exhibits the surrealism of the Quay Brothers, Jan Svankmajer, or David Lynch. Violence, danger and horror hover but remain out of sight, most arresting is the referential knowledge that filmmakers Cristóbal León and Joaquïn Cociña found their inspiration in real events. 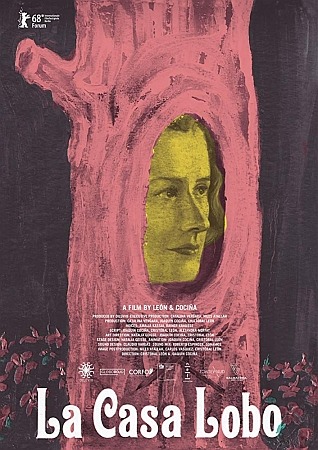