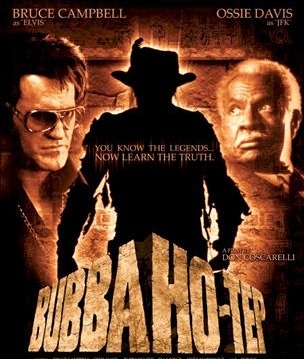 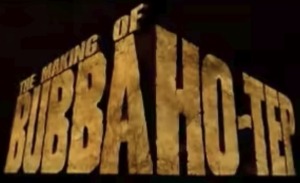 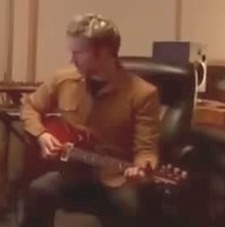 Funny, quirky, over-the-top, pure entertainment.
BUBBA HO-TEP  is a cult favorite with a unique blend of comedy, horror and drama. One of the most original films to come along in years, it begins with the premise that Elvis did not die at Graceland, but exchanged places with an impersonator and wound up in an east Texas rest home-from-hell. That’s when things get interesting.

Bruce Campbell (Evil Dead, Army of Darkness) is perfect as the aging King of Rock-n-Roll; his accent, hair, glasses, and trademark karate chops are dead-on. His performance is not just a caricature or impersonation, but a transformation. He IS Elvis.

Ossie Davis (Do the Right Thing, Jungle Fever, The Hill, The Cardinal, No Way Out) as Jack, is an excellent side-kick as a dignified black man convinced he is JFK. Davis and Campbell develop an on-screen chemistry that recalls Lemmon and Matthau, and the film’s well-developed back story offers a poignant meditation on regret, redemption and friendship, adding genuine drama to the mix.

With a budget of less than $600,000, director-screenwriter-producer Don Coscarelli (Phantasm, Beastmaster) called in favors to create effective FX the old-fashioned way, without CGI. The marauding mummy and flying scarab beetle are perfect for the Halloween season – scary, but not gory.  Bob Ivy is the Egyptian mummy in cowboy boots and a black hat using the rest home as a cafeteria and Ella Joyce is the nurse tasked with treating Elvis’s peculiar ailment. Brian Tyler’s twangy rock-n-roll score will have you bopping in your seat.

Thanks to Bubba Ho-Tep’s final confrontation between good and evil, we can set aside the memory of that overweight has-been who died disgracefully in Memphis in ’77 and replace it with an ending that is truly fit for a King.  This is a fun watch, join us! 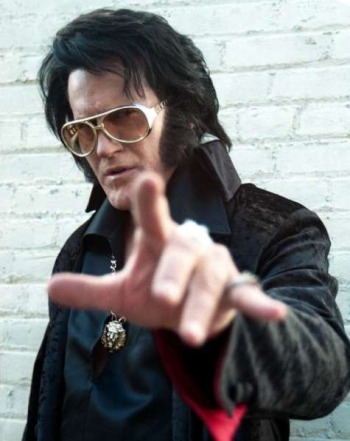 Bruce Campbell was born June 22, 1958 (the youngest of 3 brothers) in Royal Oak, Michigan. As a child, Bruce watched “Lost in Space” on TV, and ran around dressed as Zorro. He got the acting bug at age 8; his dad was performing in local community theater. At 14, Bruce got to play the young prince in “The King and I” and even got to sing. He went on to appear in several Community Theater productions, including “South Pacific.”

However, he was also interested in directing, and shot super-8 flicks with a neighborhood pal. Perhaps through fate, he met future director Sam Raimi in a high school drama class in 1975. Soon, along with Sam, and now a bunch of other high school pals, Bruce filmed about 50 super-8 movies.

During the summer of 1976, he was an apprentice in northern Michigan at Traverse City’s Cherry County Playhouse, a summer-stock company. Bruce worked 18-hour days putting up sets, being assistant stage manager, doing errands, etc. No money, but it was a learning experience (it was show biz). He attended Western Michigan University and took theater courses. Bruce became a production assistant for a company that made commercials in Detroit.

In the early part of 1979, with buddy Sam Raimi, he decided to become a pro filmmaker. Armed with a super-8 horror film “Within the Woods” which they showed potential investors, they raised $350,000 to make Evil Dead, which Bruce co-produced and starred in as Ash. Four years later, the completed film became the best-selling video of 1983 in England, and New Line Cinema got it a US release. Around this time, he married his first wife, and they had 2 swell kids. They raised 10 times as much cash for the sequel Evil Dead II: Dead by Dawn again co-produced by Bruce and starring him as Ash. He moved to L.A. In 1990, while filming Mindwarp he met his future wife (costume designer Ida Gearon) on the set.

In 1992, he rejoined Sam, and Bruce co-produced and starred as Ash in the 3rd of the Evil Dead trilogy, Army of Darkness for Universal Studios. On TV, Bruce directed many episodes of “Hercules: The Legendary Journeys.” Bruce also acted, as the recurring character Autolycus, the King of Thieves; he portrayed this villain with zest in both “Hercules” and “Xena.” More recently, Bruce starred as the title rogue of “Jack of All Trades.” Everybody loves Jack. And everybody’s heard of him — “There ain’t a French or pirate rogue who don’t know Jack!” Written by: K.D. Haisch 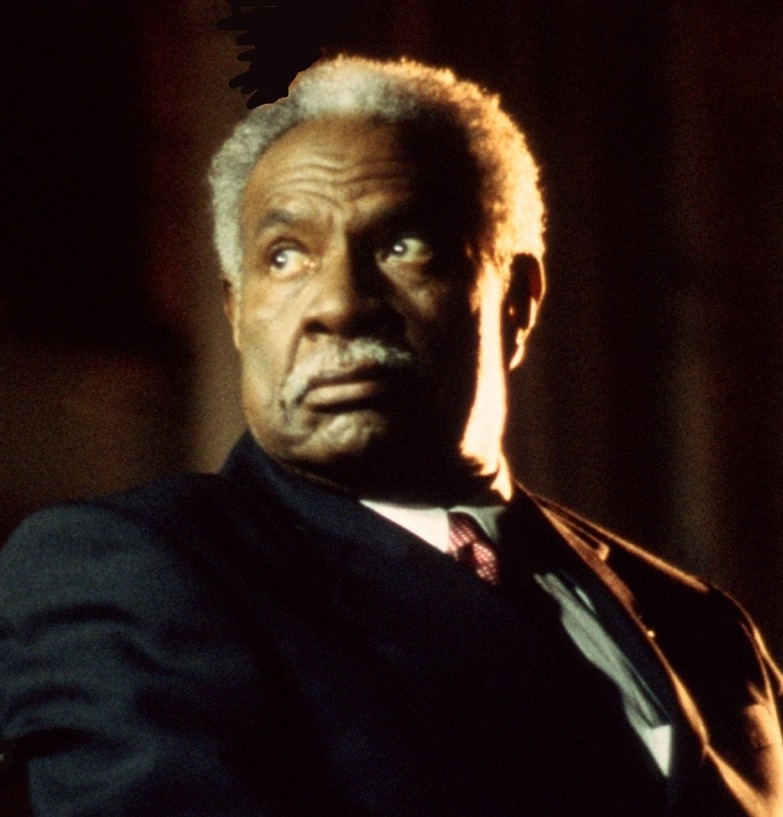 Ossie Davis was a physically imposing, passionate black actor of stage and screen, also known for his writing and directing ability. Although he was a college graduate, Davis labored in many menial jobs and served in the Army during World War II before making his Broadway debut in 1946. He first appeared on-screen in No Way Out (1950), supporting Sidney Poitier (also making his film debut) and appearing with Ruby Dee, who became his wife. It was another 13 years before Davis reached the screen again, then in Gone Are the Days (1963), an adaptation of his own play “Purlie Victorious.”

BUBBA HO-TEP was Ossie’s last major film. Before his passing, he had a particularly fruitful association with filmmaker Spike Lee, appearing in School Daze (1988), Do The Right Thing (1989), and Jungle Fever (1991). In Lee’s Malcolm X (1992) he read the eulogy he’d delivered in real life at the black leader’s funeral, which he also read on the soundtrack of the 1972 documentary Malcolm X. 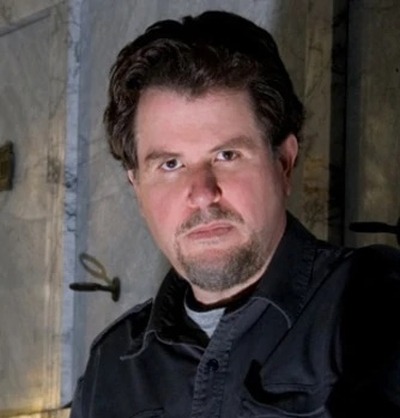 Don Coscarelli was born in Tripoli in North Africa, and raised in Southern California. He was interested in the cinema from a young age and together with his friends made several low budget movies that aired on community TV stations to very positive feedback.

After a low key start with his first feature film embracing the trials of a young teenager caught in a world of alcoholic abuse, Jim, the World’s Greatest (1975), Coscarelli followed up with a lighter comedic tale about another youngster and his view of the world as an impressionable 12 year old in Kenny & Company (1976).

Coscarelli hit the big time with the release of the highly inventive fright thriller Phantasm (1979). Once again, a young boy is at the center of a spine-chilling story about a creepy funeral home, a sinister Tall Man (wonderful acting by Coscarelli’s long time buddy Angus Scrimm), disappearing corpses, malignant dwarfs and a gateway into a hellish, other world dimension. Shot on a very modest budget, Phantasm was highly praised by horror fans worldwide, and has since spawned three sequels. First was Phantasm II (1988), followed by Phantasm III: Lord of the Dead (1994), and the third sequel, Phantasm IV: Oblivion (1998).

In 2002, Coscarelli cast horror & fantasy film screen hero Bruce Campbell in the highly off-beat Bubba Ho-Tep that depicts Elvis and John F. Kennedy hiding out in a Texas rest home where the residents are being attacked by a 3,000 year old mummy trying to bring itself back to life!  A strange script it may sound, but indie and horror film fans loved the unusual premise and quirky humor, and the film was a big hit at several film festivals and has spawned a further cult following for Coscarelli and Campbell.

Coscarelli, similar to gifted fantasy directors such as Wes Craven, Sam Raimi and George A. Romero has carved himself a true cult niche in modern horror film history, and his loyal fans eagerly await his next project.
Bio from IMDB, edited for length and clarity.

“What Don Coscarelli has made is a film that doesn’t fit into the Hollywood cookie cutter standard. He’s made a truly entertaining, funny, dark film that wasn’t produced by a Fortune Five Hundred company.”
– Gary Schultz, Film Monthly

“One of the most cool and tantalizingly bizarre flicks this year … this movie isn’t afraid to try anything.”
– James Berardinelli, ReelViews

“One of the best films of the year.”
Timotei Centea, Movie-Vault.com

“Mind-blowing in its originality, Bubba Ho-tep transcends the “late-night cult” genre by virtue of captivating performances by Campbell and Davis, and the assured direction of Don Coscarelli. Coscarelli handles the bizarre material with such precision that you actually believe that Elvis and JFK are alive and not quite well. He treats the characters, and old age for that matter, with such respect that no matter how absurd things become, you are completely with him. Bubba Ho-tep, with its cinematic flash and terrifically offbeat humor, is a fantastic story of redemption, courage and friendship.”
– CineVegas International Film Festival

“I haven’t seen anything funnier in a long time!”
-Mark Rahner, Seattle Times

WHAT:
“BUBBA HO-TEP” A 92-minute comedy/drama/horror-spoof. This film is rated (R), language.

ROAD CLOSURES - NOT AN ISSUE

With respect to the Flying Pig Marathon, Sunday Afternoon:
THERE IS NO SCHEDULED CLOSURE OF STREETS THAT WILL IMPACT ACCESS TO THE GARFIELD THEATRE BEFORE OR AT SHOW TIME.
Source:  Flying Pig Website.

tails on the CWC Policies Page.