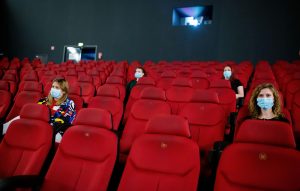 Autumn has seen the advent of more chaos in the film industry.

STUDIOS:  With US audiences hesitant to return to theatres, “Tenet” (a flawed and somewhat odd choice as “the” movie industry savior) did not meet box office expectations with sharply dropping domestic grosses week-to-week.

Desirous of preserving box office potential, the major studios have pushed other “big” theatrical releases into 2021 and 2022, with the recent postponements of “No Time to Die” and “Dune” inducing exhibitor panic. An exception is “Wonder Woman 1984,” slated to open on Christmas Day.

But, one can only push releases back so much and 2021 is starting to fill up, damping box office expectations as titles will be forced to open on top of each other. Revenue in 2021 and 2022 may not reach prior year levels simply because the schedules will be crowded and weekly release of blockbusters will cannibalize sales, effectively imbuing commodity status. Another revenue caveat is that the consumer cost to stream is per household, less than the theatre model of charging admission for individual viewers.

Starting prior to the pandemic, but accelerating in March as theatres closed, the studios sold a number of titles to streaming platforms like Netflix, Hulu and Amazon. In that same vein Disney, the world’s largest content creator (with its own streaming platform), will soon announce a major organizational shift to focus on streaming.  Makes sense, because with hardtop theatres the studios face critical public health and political factors beyond their control. The platform shifts and postponements we see now portend a delayed recovery, likely deep into 2021.

AMC, the largest US chain with 660 theatres, saw six-month 2020 revenue drop 99% versus prior year, with a loss of $2.7 Billion. With a burn rate of over $100 million monthly and attendance around 15% of last year’s numbers, AMC is facing calamity.  Saddled with empty real estate and no reserves, it’s likely they will liquidate some locations and/or turn to private film rentals and diverse uses – auctions, church services, gamers, live performances, etc. – for those willing to risk indoor group activities.

Last week, Cineworld’s Regal chain (second largest in the US) closed its 536 theatres and laid off 20,000 employees indefinitely until “things improve.”  At the Cinemark chain (third largest in the US) 25% of theatres are closed, some permanently. Industry tracking biz ComScore reports that 45% of the nation’s 6,000 theatres remain closed. The chains cite lack of product, but the general public has health concerns despite exhibitor precautions.

It seems like magical thinking for exhibitors to assume substantial numbers of people will simply show up if there are more films in theatres. Our patrons say they need to feel comfortable and personal safety matters most.

I have yet to learn of any Covid-19 cases traced to movie houses, but the fear factor remains a major audience deterrent.

In reality, cautiously operated cinemas are not as risky as other venues: Active voice projection, masked or not, is far more threatening than sitting in a masked, socially distanced movie theatre.  Public speaking, singing and acting on stage, poorly distanced loud talking in bars and restaurants, all enhance the spread of virus aerosols – activities seldom seen in a movie house.

An industry survey published October 19 indicates that while a very small number of infected individuals have attended movies, there has been “no major outbreak or transmission attributed to cinemas.”  Nothing is risk-free, but it appears that masking and distancing protocols practiced by reopening theatres has been effective, especially in combination with attendance levels that are even lower than published capacity limits.

Independent and art house theatres – 47% of all US movie screens – are up against it as well as the chains. Even with a number of niche titles available, the problem cited by many operators is that it costs more to reopen (and stay open) than to remain closed, due to capacity limits, added Covid mitigation expense and dismal attendance. At least three theatres in our region reopened, only to close again: the Kenwood in Cincy, the Little Art in Yellow Springs and the Kentucky in Lexington.

To control expenses, chains and independents alike are considering – or have already made – a reduction in the number of days open and/or the number of screenings per day.  But, the biggest cost element in the exhibition sector is the rent paid to owners of properties where theatres reside – which is why many are renegotiating leases and/or walking away from marginally productive locations.

Last Wednesday (09-30-2020), the National Association of Theatre Owners (NATO) CEO John Fithian told Congress, “most of our smaller and mid-size members are going to go bankrupt or be closed entirely by December 31.” 69% of members surveyed told NATO this is exactly the case. Some businesses have cash cushions, but few have sufficient capital reserves to carry on for 18 months with very little or no revenue.  Without external subsidy or extremely deep pockets, attrition could be severe.

BOTTOM LINE:  For movie theatres, as with live performances, restaurants, sports events, large gatherings, etc., the future hinges upon control of Covid-19 – via successful mitigation of infection spread and ultimately the actual nationwide deployment of an effective vaccine. And, it is safe to say that with movie theatres the future will not replicate the past.

Here’s an update on streaming, theatrical openings and push-backs:

The theatrical exodus continues, 21 more titles move to small screen. In addition to previous streaming announcements from March – August, these films will also bypass theatres for direct streaming:
To Amazon:  Coming to America 2, My Spy, Borat 2, Without Remorse, Run Sweetheart Run, The Glorias
To Netflix:  I’m Thinking of Ending Things, The Trial of the Chicago 7 (also in a handful of theatres), The Woman in the Window, Enola Holmes, Mosul,
To Disney+:  Mulan, Soul, The One and Only Ivan,
To HBO Max:  The Witches, Charm City Kings.
To Hulu:  Run.
To VOD:  Antebellum, Greenland, Spell, Love and Monsters