Who will speak for Nature?


Presented by Cincinnati World Cinema and Citizens for Rights of the Ohio River Watershed (CROW). 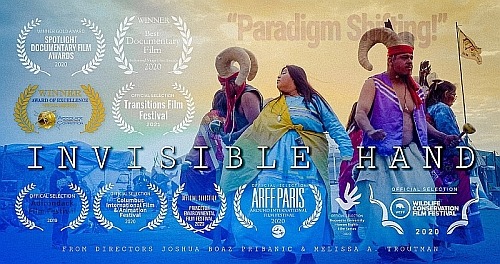 Written and directed by Joshua B. Pribanic & Melissa A. Troutman, produced by acclaimed actor and environmentalist Mark Ruffalo.  Join us as we welcome the filmmakers and special guest Tish O’Dell for a livestream discussion on Zoom, Thursday February 25, 7 PM – registration included with your film rental and also available separately.
Ticket purchasers after Feb 25 receive access to the recorded discussion.

Who will speak for Nature?

You may be surprised by the environmental consciousness in small town / rural America, and the growing number of responsible people everywhere who care deeply about our environment.

The true story of four communities giving Nature a voice.

The term “invisible hand” as first introduced by Adam Smith in The Theory of Moral Sentiments (1759) described the unintended social benefits of an individual’s self-interested actions, a concept referencing income distribution.  Later, when Smith wrote The Wealth of Nations in 1776, the term was more directly linked to production and employment of capital in support of domestic industry.

Fast forward 200+ years:  For the first time in United States history, in the fall of 2014, an ecosystem filed to defend itself in a lawsuit claiming its ‘right to exist’ in Grant Township, Pennsylvania. But watersheds can’t hire lawyers or speak, so how can do watersheds have rights?

There are no gas stations or stores in Grant Township, Pennsylvania and no post office, or public water supply. When a corporation proposed injecting toxic waste underground there, the people of Grant Township passed a Community Bill of Rights banning waste injection and giving legal Rights to Nature.

Since then, Grant Township was sued by Pennsylvania General Energy (PGE), an oil and gas corporation with tons of fracking waste to unload, claiming that it has the “right” to inject toxic fracking waste without community consent. The Pennsylvania state government also sued the people of the township, claiming an abuse of power.

Across Pennsylvania, and worldwide, communities are fighting the same battle against the corporations and governments. In the anticipation of losing this battle, Grant Township took another radical turn and became the first community in history to enact a law legalizing civil disobedience in (c. 2016).

In Toledo, Ohio a precedent-setting vote was passed to enact the Lake Erie Bill of Rights (LEBOR), granting personhood to international waters.

Activists leaving Standing Rock joined those on the Pennsylvania and New York border where the Seneca Nation of Indians aligned with communities in the Triple Divide to stop radioactive fracking waste from entering Ohi:yo’ waters. Terry Pegula, owner of Buffalo Bills and Sabres, threatened to sue INVISIBLE HAND filmmakers and whoever continues to speak out about his oil and gas company and their efforts.

The four entities, Grant Township, Toledo’s Lake Erie Bill of Rights, Defend Oh:yo’ and Standing Rock, are joined in an international fight to protect more than just water. They fight for their community, democracy, and for Nature as a living entity unto itself.

Connecting the fight in Grant Township to the conflict in Standing Rock, North Dakota, INVISIBLE HAND presents a new outcome of the “invisible hand” used by free market economists and capitalists in their promotion of self-interest and the exploitation of nature for profit — the creation of the “Rights of Nature.”

Narrated by award-winning actor Mark Ruffalo and directed by award-winning filmmakers Joshua B. Pribanic and Melissa A. Troutman, INVISIBLE HAND takes you inside the struggle behind the curtain of our daily economy to reveal a new future for democracy and Nature.

Joshua B. Pribanic and Melissa A. Troutman are the writers and co-directors of INVISIBLE HAND, produced by award-winning actor and environmentalist Mark Ruffalo.  Joshua and Melissa are co-founders of the investigative news nonprofit Public Herald and produced their first documentary Triple Divide in 2013, and then Triple Divide [Redacted] in 2017, which were co-narrated by Ruffalo and featured investigations of unconventional oil and gas development, a.k.a. fracking.

Public Herald’s work attracted attention from The Daily Show with Jon Stewart, which produced a segment on fracking in 2013, and has been featured on Pittsburgh NPR, HuffPost Live and over 200 other national and international media outlets. Public Herald’s work has received support from: the James L. Knight Foundation, Colcom Foundation, 11th Hour Project, Heinz Endowments, Investigative News Network (now Institute for Nonprofit News), and Tesla Motors.

Read more about Melissa and Joshua in the Discussion Section on this webpage.

The haunting, soulful music in INVISIBLE HAND was created by Heavy Color – the composer/producer duo of Ben Cohen and Sam Woldenberg – Ohio musicians out of Toledo.

“Our legal system is rigged to commodify Nature, to favor private property above Life,” said INVISIBLE HAND co-writer & director Melissa Troutman. “It’s a system that makes it perfectly legal to harm innocent people without their consent and threaten the survival of the planet.”

Co-writer and director Joshua Pribanic says, “INVISIBLE HAND is about witnessing the elephant in the room before it’s extinct. It’s showing us that, when face-to-face with the harmful effects of capitalism and our current way of life, Rights of Nature becomes the battle cry. My hope is that wherever you are, this film can speak to your fight.”

Mark Ruffalo added, “People are adapting to these perils in daring and creative ways – and winning. INVISIBLE HAND shows how to fight the forces that put profit above all else while addressing the root cause of our flawed system.”

UPDATE: If you purchase the film after February 25, you will receive free access to the recorded discussion with your ticket.
Join us for a lively and informative livestream discussion on Zoom, Thursday February 25, 7 PM. 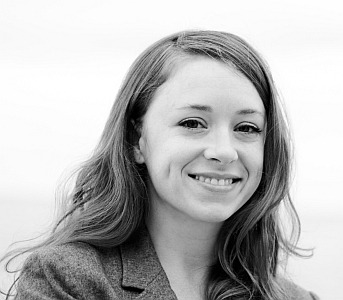 Invisible Hand director Melissa Troutman is a writer, director, documentary filmmaker, and vocal artist from Potter County, Pennsylvania, the ancestral lands of the Susquehannock and Haudenosaunee. She began investigating shale gas extraction in 2010 as a newspaper reporter in Pennsylvania. With Joshua Pribanic she co-founded the investigative news nonprofit Public Herald in 2011 and co-directed three documentary films, which she narrates with Emmy-winning actor Mark Ruffalo. In 2019, Melissa received the Community Sentinel Award for Environmental Stewardship for her work as an investigative journalist and filmmaker. She has conducted over 300 speaking events, including lectures, panel discussions, and film screenings. 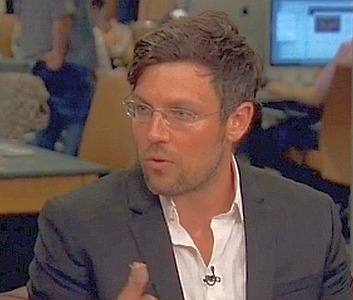 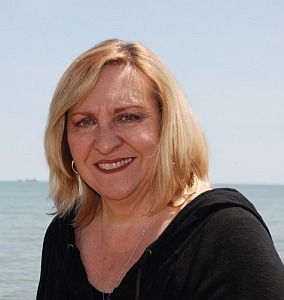 Tish O’Dell is an organizer with the Community Environmental Legal Defense Fund (CELDF), and member of the Ohio Community Rights Network (OHCRN), assisting communities with rights-based initiatives to create a just and sustainable future. CELDF helps communities across the country to develop laws including the “first in the nation” law recognizing the rights of a specific ecosystem – the Lake Erie Bill of Rights in 2019.
Tish has conducted workshops and discussions nationwide; was featured in the documentary We the People 2.0, appeared on The Daily Show with Trevor Noah, Living on Earth, The Julie Rose Show (NPR), and is included in the book We the People: Stories from the Community Rights Movement in the United States. 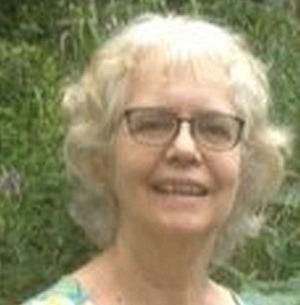 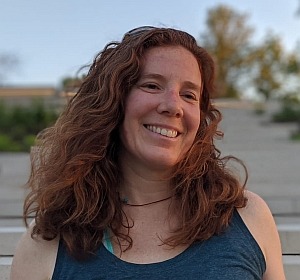 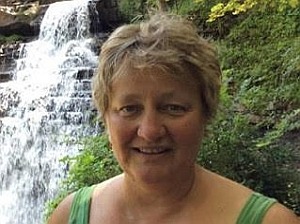 About Citizens for Rights of the Ohio River Watershed (CROW):

CROW is working to legalize the rights of the Ohio River Watershed, giving essential ecosystems a voice in communities concerned about drilling, tunneling, extraction, and poisoning. Read about the growing “Rights of Nature” momentum at Forbes.com.  Learn more about our local efforts at our Facebook page.

Why it matters. Weakened regulatory protections often negate the rights of local communities to defend their natural ecosystems. Treated as voiceless property, our life-supporting ecosystems are increasingly exploited for profit as the Earth’s capacity to sustain us is diminished.

Native peoples have long recognized our interconnection with nature. But our current legal system rarely grants formal standing to natural resources such as rivers, mountains, flora, and fauna. This is something we can and must address, while there is still time.

Now in its 20th year, Cincinnati World Cinema is an all volunteer organization committed to the importance of films that inform and educate, as well as entertain. We engage the community to explore the human condition and celebrate cultural diversity through cinema as an art form and educational tool for positive change. CWC presents films that otherwise might not appear on a big screen in this market, including international, documentary, American independent, short films and locally-produced works.

We believe in cinema as a collective experience on a large screen with a film community sharing a common bond extending from the onscreen experience to the discussions which flow afterward. To enhance the educational experience, our post-film discussions are led by local authorities, CWC staff, and/or filmmakers. CWC collaborates with arts, cultural and educational organizations. Together we curate and co-present individual films or thematic collections. When appropriate, we offer multi-disciplinary events. In our theatre, The Garfield, we combine film with live music, theatrical segments, readings, etc. During the pandemic we have continued our curation online, via the CWC Virtual Cinema. 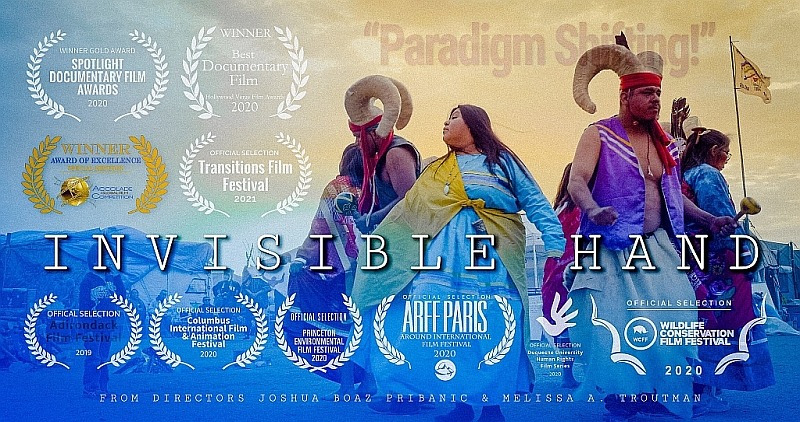