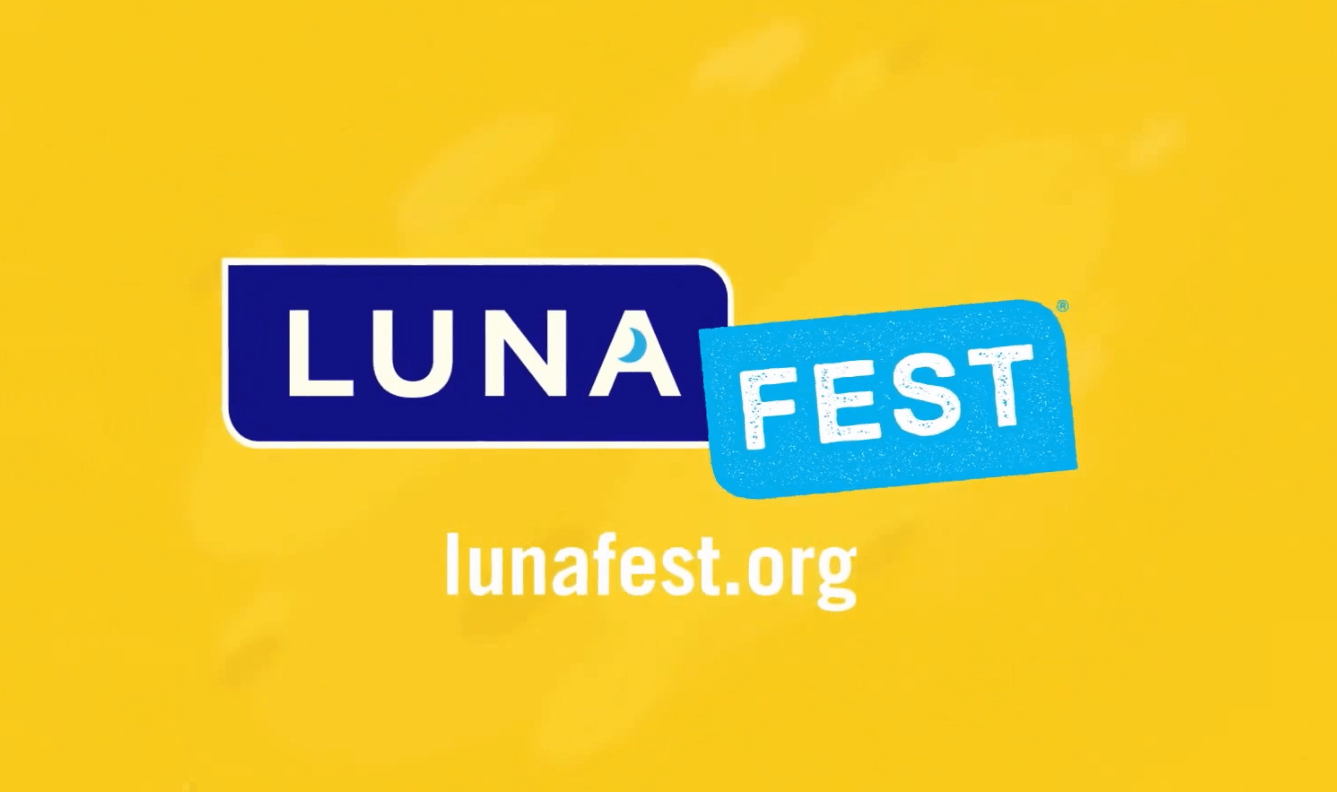 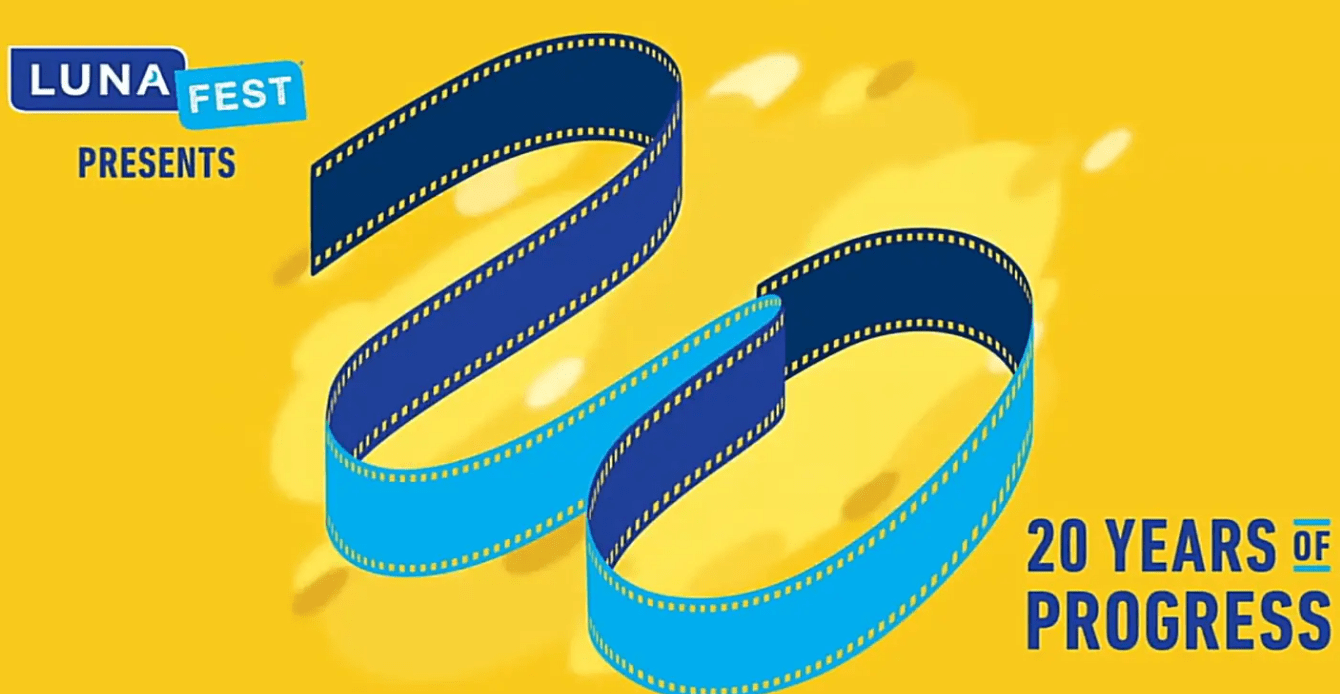 LUNAFEST, the touring film festival, was first brought to Cincinnati by CWC in 2006. It features short films made by and about women … for women and the men who care about them, addressing universal issues that impact women of all ages, their families, relationships and careers.

“Someday is Now” is the theme of this year’s short films, celebrating twenty years of Lunafest films devoted to women, with white, black, Hispanic, Native American, Arab and European women, reflecting the world we live in. The engaging stories are about explorers, filmmakers, athletes, artists, immigrants, conservationists and scientists.

Different this year… This edition of the LUNAFEST films are all short documentaries. Sometimes docs are flat-out depressing – these are not! They are moving, will make you think and illustrate how regular people are making our country and the world a better place. They feature strong women, powerful images, and impactful language – reflecting the diverse perspectives of the filmmakers and their subjects.

Proceeds from the LUNAFEST screenings will be shared with Women in Film Cincinnati, a non-profit organization dedicated to helping women achieve their highest potential within the global filmmaking, entertainment, communications and media industries.  ⇝ More about Women in Film Cincinnati: wifcincinnati.org.
Learn More — film descriptions, speaker bios and event details, below.
Help spread the word — share the flyers and banners below.

WHAT:
“THE LUNAFEST FILM FESTIVAL” An 86-minute short film program followed by post-film discussions led by filmmakers from Women in Film Cincinnati. Most people find the discussion worthwhile — budget two hours for the complete experience. Some films may contain content not suitable for children or younger teens. The films are not rated, and Lunafest suggests ages 16 and up as a general guideline.
☀ Proceeds from the screenings will benefit Women in Film Cincinnati.

☀ (2) In the CWC VIRTUAL CINEMA, online streaming, 24×7, with two viewing periods: September 20-22 and September 27-29.
Watch Windows: two 48-hour periods in which to start watching – you can start, stop, restart within your choice of viewing windows. Access codes are encrypted and device-specific – you need to start watching on the actual device you’ll use to view the films, ex: your laptop connected to your TV.

As the polar ice cap melts, reaching the North Pole has become increasingly dangerous. But an expedition of women from the Arab World and the West set an audacious goal of skiing to the pole.

Holly Morris and her all-woman film crew undertook an ambitious polar production: no snowmobiles, no dogs … no craft services. Nowhere to hide from the -40 temperatures or polar bears, and no way to avoid the open leads of water in the semi-frozen Arctic Ocean over which they laboriously pulled sleds, loaded with hundreds of pounds of camera equipment.

Narrated by director Morris, this behind-the-scenes short film (companion to the feature film Exposure) captures the gravitas and debacle of an epic filmmaking undertaking, as well as the indomitable spirit of the expedition team itself—novice explorers from who trained for 2 years to become the last over-ice expedition to reach the fast-melting North Pole.

This is the story of AJ Andrews, a superstar athlete ignored by the sports industry. The first woman to win a Rawlings Gold Glove Award, she has struggled to make it as one of the best professional softball players in the world.  But winning the Gold Glove did not change the fact that Andrews earns less than $15k a year in an industry more willing to pay female athletes to model than to play their sport.

When she was growing up in a tiny impoverished village high in the mountains of Guatemala, a 12-year-old girl never imagined leaving. But when her mother decided to flee an abusive home she was thrust into a journey that would forever change her.

After a smuggler separated the mother and daughter, she focused on a single goal – surviving so she could find her mother.  This timely, emotional and intimate true story of one immigrant’s journey from endangered child to DACA worker reveals a key truth behind the immigration debates: like so many who come to the USA, our young heroine just wants a home where she can be safe.

Young women scientists are told that the best way to create lasting change for women is to keep your head down, keep your mouth shut, do your work, and wait until you’re in a position of power. But after a neuroscience Ph.D. student is assaulted by a respected Dartmouth professor, she bands together with the other women in her department to file a lawsuit against the school. Together, the women make the brave and life-changing decision to speak up for women in science everywhere.

Mixed-media artist Sophia Wallace rejects the notion that women are sex objects who take direction from male power and accept all with little resistance.  Instead, she imagines a culturally cliterate world, where all people are equal and able to live with rich possibility and purpose – where a woman defines sex according to her own values, desires, and pleasures.

Peabody Award–winning director Maria Finitzo connects women’s struggle for personal and political power with the suppression of their human right to be sexual – advocating (as does Ms. Wallace) a “culturally cliterate” world with personal autonomy as an attainable alternative.

A lifelong angler, Autumn Harry had never fished beyond the waters of her reservation until she picked up a fly rod. Perspective comes from co-director Tracy Nguyen-Chung, the founder of Brown Folks Fishing, a multimedia project and organization that cultivates the visibility, representation, and inclusion of people of color in fishing and conservation.

There’s no stopping the legendary artist Betye Saar, even at age 93. Pushing boundaries and creating art for 70 years, this portrait shows she isn’t done fighting inequality in her personal and powerful work. Inside her LA studio, Saar talks about collecting found objects, print making and fiber art, African American history, art as a weapon, and making people think.

The film explores Saar’s civil rights activism and how, through her artwork, she has taken the stereotypical images that were once used to demean African-Americans and has weaponized them in the fight for equal rights.  As we see in the documentary, one of Saar’s most acclaimed pieces features Aunt Jemima with a rifle and a grenade. 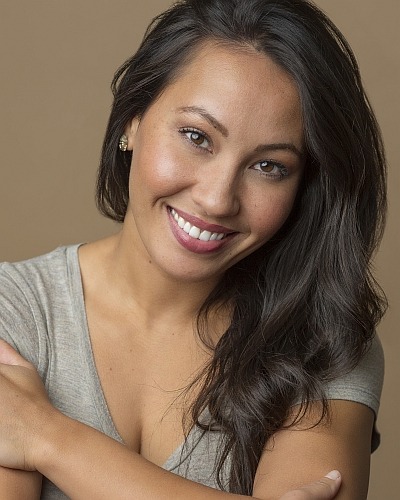 A new Women in Film Cincinnati board member, Abi Esmena was born in Hawaii and transplanted to the Queen City. She is a SAG-Aftra actor with over a decade of experience in front of & behind the camera.

As an actor, she has performed in numerous MainStage theatrical productions such as the Know Theatre’s, Girl in the Red Corner, more than 100 local and national commercials, indie films/series, and was recently seen in theaters as Officer Crain in the 2021 release of the Tribeca-slated indie thriller, Don’t Tell a Soul.

Abi owns and operates AuditionRoom513, a local acting studio focusing on film-centric training where she coaches actors of all ages. 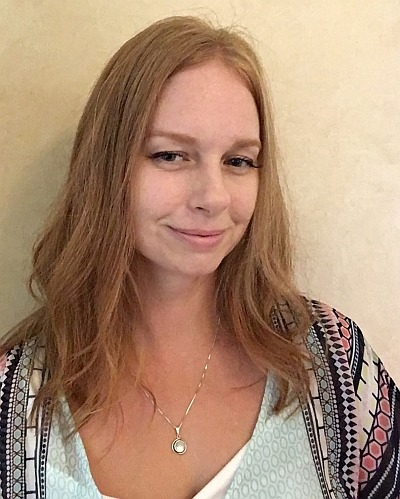 A founding board member and current president of Women in Film Cincinnati, Jaime Meyers Schlenck is a film editor whose career spans more than two decades in LA and Cincinnati.

Her work includes the Primetime Emmy Award winning documentary A Lion In The House, TV series including HBO First Look, and more than 60 behind-the-scenes documentaries for major studio releases such as Sex And The City and Hairspray.

As lead development editor at Magical Elves (Top Chef), Jaime edited pilots for pitching shows to network (Bravo, AMC and Lifetime). She was additional editor on the Oscar winning documentary American Factory 美国工厂 and she recently edited 9TO5: The Story of a Movement (Netflix). Jaime is currently working on the documentary Dave Chappelle: This Time This Place. 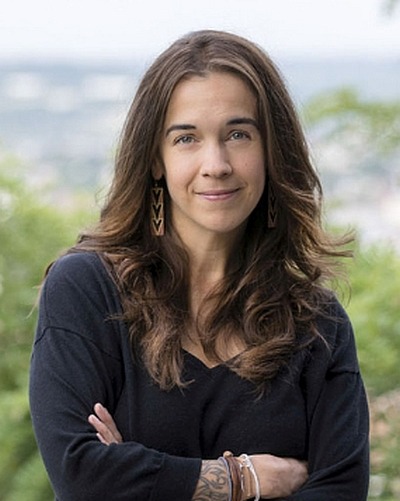 A founding board member and current vice president of Women in Film Cincinnati, Sara Drabik is a documentary filmmaker and Associate Professor of Electronic Media and Broadcasting in the College of Informatics at Northern Kentucky University where she teaches documentary filmmaking and media literacy.

Her work has been featured by the University Film and Video Assoc., the Broadcast Education Assoc., the University of Oxford Saïd Business School, NPR and KET/PBS. Her current research is a collaboration with the International Women’s Coffee Alliance exploring the changing roles of women in the international coffee industry. 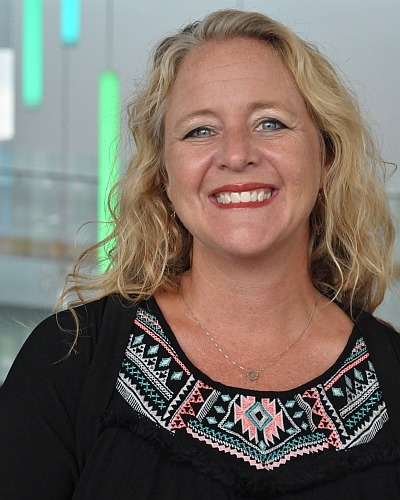 Tracy Songer is an assistant professor in Electronic Media and Broadcasting at Northern Kentucky University and a member of Women in Film Cincinnati.

Prior to NKU, Tracy worked for over twenty years in the production industry. She served as executive producer for Upstream 360 and as a freelance producer in commercial production. Tracy was also the senior producer for many popular shows including DIY’s Desperate Landscapes and HGTV’s My Yard Goes Disney. 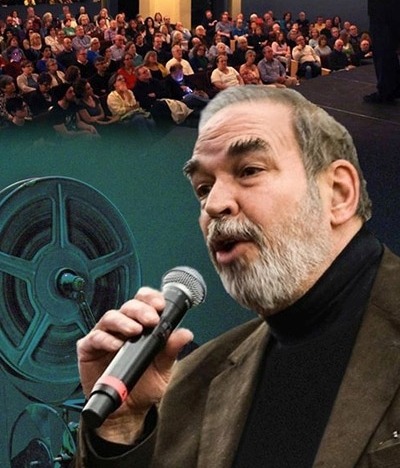 A founding board member of Women in Film Cincinnati, Tim Swallow operates The Garfield Theatre and is the founder and CEO of Cincinnati World Cinema, with a 20-year history of film programming and presentation, including world premieres and festivals, and approximately 300 films by women.

Prior to CWC, he spent 20 years as a live events producer, focusing on music, theatre and the arts. His experience includes management, marketing, finance, IT and non-profit boards. Specializing in short film, Tim’s passion is building a film community to experience high-quality international and independent cinema not otherwise available in this market. 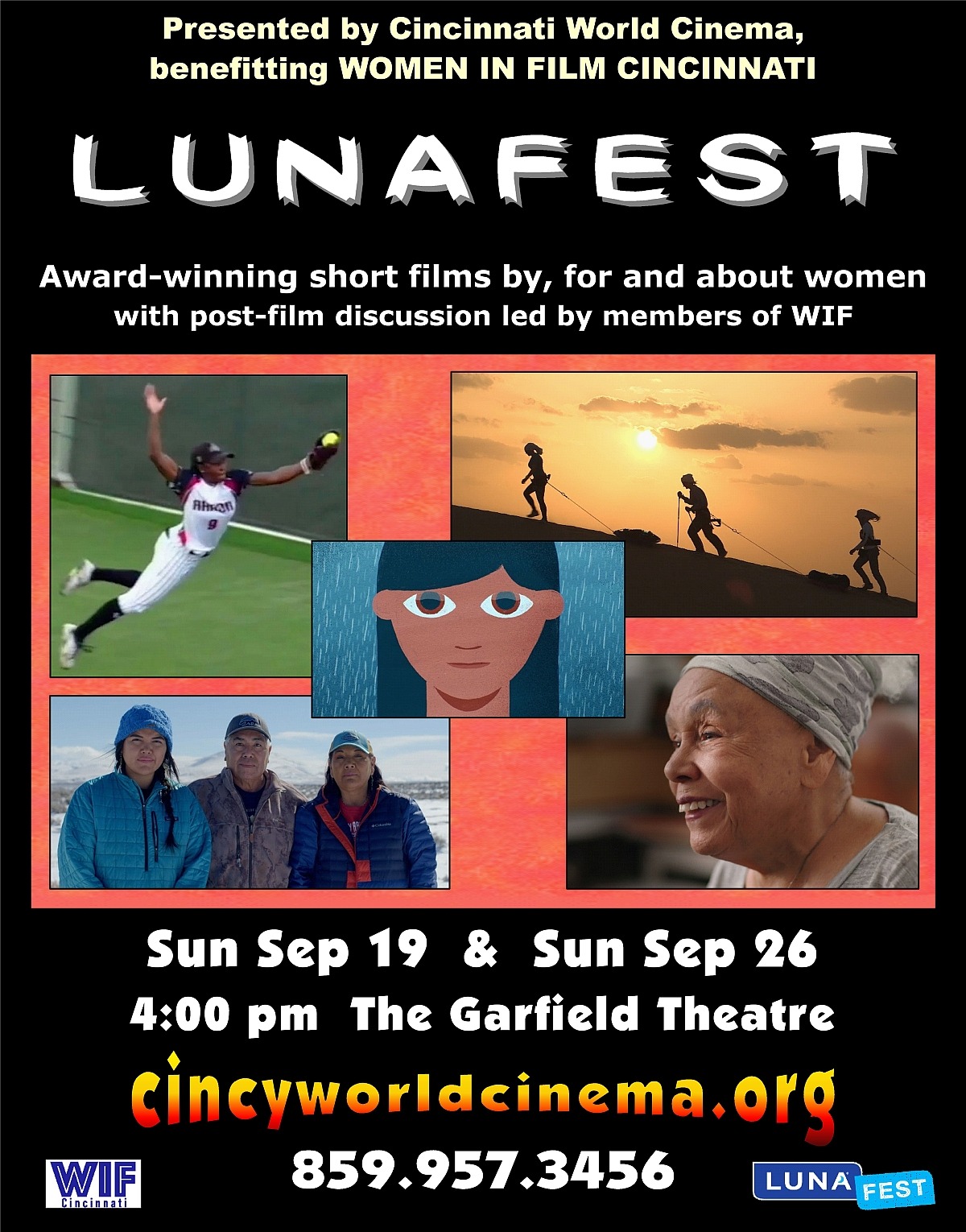 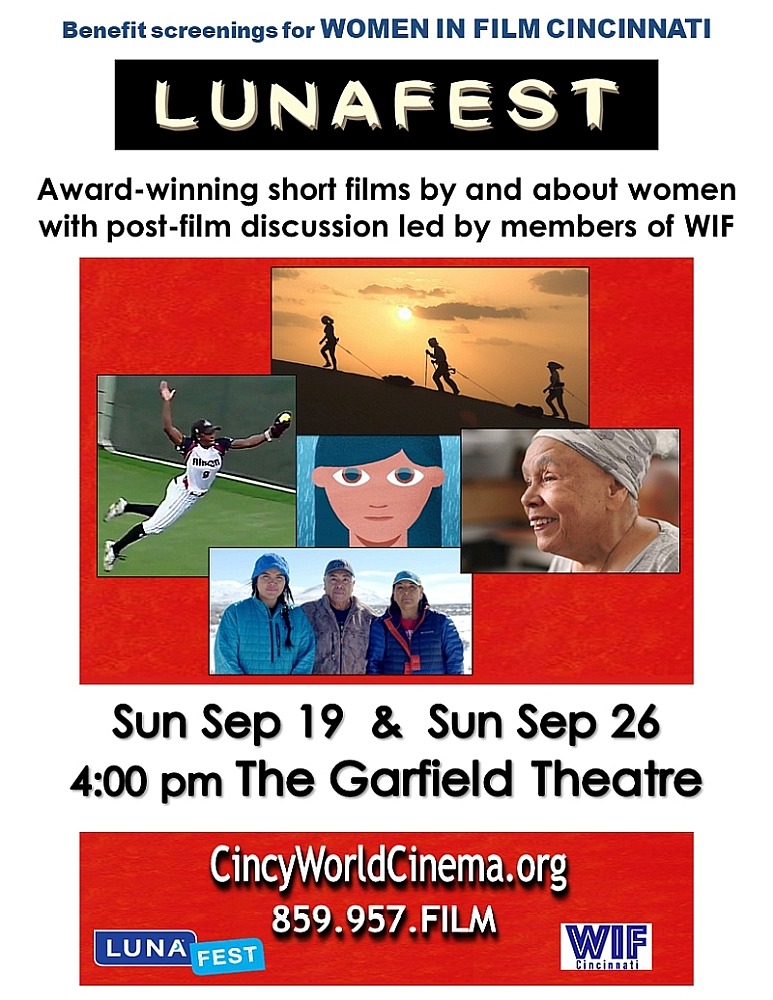 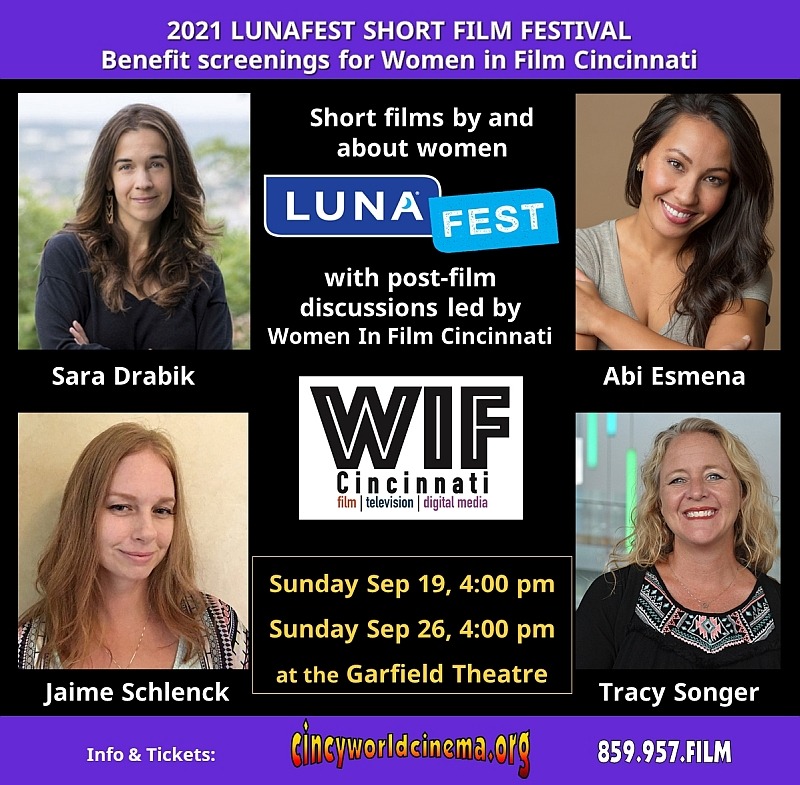 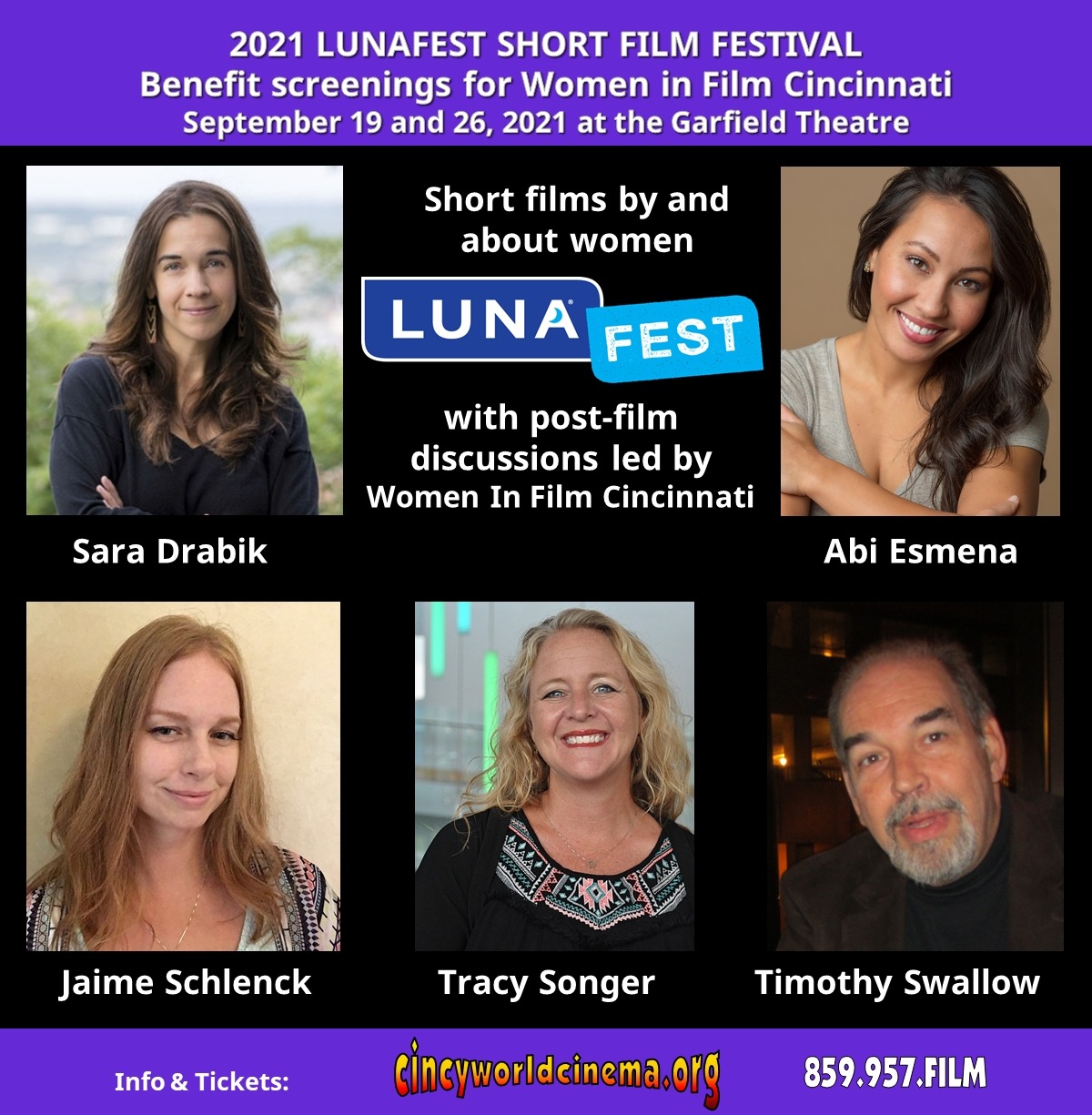