☀ (2) Online streaming at the CWC VIRTUAL CINEMA.
Tickets, see below.  Info on how to watch online content, Virtual Cinema FAQ.

The encore weekend May 14-16 is modified to request that all patrons be vaccinated and willing to abide by the protocols in Covid-19 Safety section below.

The first and second weekends (April 9-10-11 and 16-17-18) are reserved for those who have received the Covid-19 vaccine. You will be asked to display your vaccination card for admission.

OPEN SCREENINGS: The third weekend (April 23-24-25) is open to all healthy patrons, with or without vaccination, willing to abide by the protocols in Covid-19 Safety section below.

☀ (2) At the CWC VIRTUAL CINEMA, online streaming, 24×7, Starting at noon, April 2 through May 27.
Watch Windows:  Docs and Live-Action – 30 days to start, 2 weeks to complete, can start, stop, restart.  Animation – 30 days to start, three days to complete, can start, stop, restart.
Access codes are encrypted and IP(device)-specific – you need to start watching on the actual device you’ll use to view the films, ex: your laptop connected to your TV.

TICKETS:
All tickets will be sold in advance, available for online purchase via the Tix Button, top of this page, and by phone at (859) 957-3456.  As usual, tickets are no-refund/no-exchange, although we will try to work with you if you need to change dates and there are sufficient lead time and seat avails.

ADA ACCESS:
The Garfield offers a direct indoor path from the front door to wheelchair spaces and companion seats (no ramps, no stairs). Individuals using walkers, scooters or wheelchairs should call (859) 957-3456 at least 48 hours in advance to confirm your screening date and time. When notified, our staff will be standing by to assist.

DO NOT SPLIT, Anders Hammer and Charlotte Cook, USA/Norway/Hong Kong, 36 minutes.
In 2019 Hong Kong was rocked by the largest protests since Britain handed back the area to China in 1997, as citizens rebelled against Chinese government attempts to tighten controls. This story captures the determination and sacrifices of the protesters, the government’s backlash, and the passage of the new Beijing-backed national security law.

HUNGER WARD, Skye Fitzgerald and Michael Scheuerman, USA, 40 minutes.
Filmed from inside two of the most active therapeutic feeding centers in Yemen, HUNGER WARD documents two female health care workers fighting to thwart the spread of starvation against the backdrop of a forgotten war. The film provides an unflinching portrait of Dr. Aida Alsadeeq and Nurse Mekkia Mahdi as they try to save the lives of hunger-stricken children within a population dealing with famine.

COLETTE, Anthony Giacchino and Alice Doyard, USA/France, 25 minutes.
Former French Resistance member Colette Marin-Catherine refused to step foot in Germany for 74 years. This changes when a young history student named Lucie enters her life and convinces her to visit the concentration camp where the Nazis killed her brother.

BURROW, Madeline Sharafian and Michael Capbarat, USA, 6 minutes.
A  young rabbit tries to build the burrow of her dreams, but cluelessly digs herself deeper and deeper into trouble. Eventually she learns there is no shame in asking for help. Adorable animals and impressive animation are trademark Disney/Pixar, typically employed as the front end of their family-oriented feature animated films. Charming, sweet, with a happy ending.

GENIUS LOCI, Adrien Merigeau and Amaury Ovise, France, 16 minutes.
In this, the most abstract of the nominees, we join a young Black woman, Reine, encountering mental disorientation and existential confusion as she journeys through her own memory, ranging from domestic tranquility to urban chaos and back again.

OPERA, Erick Oh, South Korea/USA, 9 minutes.
A stunning, multi-layered portrait of the cycles, foibles, and wonder of humanity, filled with beauty and absurdity.  Inspired by Michelangelo, Botticelli and Bosch, it consists of a giant pyramid with a continuous loop of activities charting human history – cycles of life and death, order and chaos, conformity and rebellion, hope and despair.

The filmmaker felt compelled to convey the division and tribalism that have intensified in recent years, striving to make something meaningful and provocative through animation. “This singular history dominates all facets of society: education, politics, and philosophy, science, and art,” says director Erick Oh, a Pixar alum, clearly with a mind and vision of his own.

IF ANYTHING HAPPENS I LOVE YOU, Will McCormack and Michael Govier, USA, 13 minutes.
In the most timely of the animated nominees, parents struggle with the loss of their daughter with a grief made palpable by ever-present black shadow figures expressing feelings they cannot openly voice.

The powerful impact is heightened by 2D animation in basic black and greys, with sparing use of color to accent key memories. When shared memories show their daughter walking towards her school, the cause of her death becomes sharply apparent.

YES-PEOPLE, Gisli Darri Halldorsson and Arnar Gunnarson, Iceland, 8 minutes.
In the morning an eclectic mix of people face the everyday routine, such as work, school or housework. As the day progresses, their character traits are revealed and their relationships are tested. At home in the evening, they reflect upon the deeds of the day.

KAPAEMAHU, Dean Hamer and Joe Wilson, USA, 9 minutes.
Long ago, four extraordinary individuals of dual male and female spirit brought the healing arts from Tahiti to Hawaii. Beloved by the people for their gentle ways and miraculous cures, they imbued four giant boulders with their powers. The stones still stand on what is now Waikiki Beach, but the true story behind them has been hidden – until now. Narrated in an ancient Hawaiian dialect, Kapaemahu brings this powerful legend back to life in vivid animation, seen through the eyes of a curious child.

TO: GERARD, Taylor Meacham, USA, 8 minutes.
A sprightly elderly man, through a little magic, gives a child the ability to dream of possibilities. First shown at the Annecy International Animated Film Festival in France, the retro feel of this story is perfectly set by the French influenced, European styles of animation.

LIVE ACTION SHORT FILMS, approximately 130 minutes.
This is one of stronger live-action programs we’ve seen over twenty years. Timely and well-made with inventive story lines.  Four are excellent, one is very good.
Ratings equivalent of “R” for mature themes and language.
~~~~~~~~~~~~~~~

THE PRESENT, Farah Nabulsi, Palestine, 24 minutes.
On his wedding anniversary, Yusef and his young daughter set out in the West Bank to buy his wife a gift. Between soldiers, checkpoints and segregated roads, how difficult could it be to go shopping? An unembellished slice-of-life where oppression is an every day circumstance, with excellent performances.

FEELING THROUGH, Dough Roland and Susan Ruzenski, USA, 19 minutes.
A poignant late-night encounter on a New York City street leads to a profound connection between a teen in need and a man who is DeafBlind. Influenced by executive producer and Oscar winner Marlee Matlin, this is the first film to cast a deafblind actor — Robert Tarango rises to the challenge with an admirable performance. And, co-star Steven Prescod nails the role of reacting to a person who cannot see or hear.

TWO DISTANT STRANGERS, Travon Free and Martin Desmond Roe, USA, 32 minutes.
A present-day parable of time travel – a bittersweet satire loosely based on the theme of Groundhog’s Day – the protagonist’s repeated attempts to get home to his dog are thwarted by a recurring deadly encounter that forces him to relive the same awful day over and over.  Created by former Daily Show and Full Frontal writer and Emmy winner Travon Free, the film uses tragicomic elements to drive home the repetitive and abhorrent circumstances that comprise an all-to-common aspect of American life.

WHITE EYE, Tomer Shushan and Shira Hochman, Israel, 21 minutes.
A man finds his stolen bicycle, now possessed by a stranger. While attempting to retrieve it, he realizes the nature of true need and is faced with a moral dilemma. Set against the universality of immigration driven by desperation, we see empathy versus the trait of self-interest colored by the insensitivity of bureaucracy.

THE LETTER ROOM, Elvira Lind and Sofia Sondervan, USA, 33 minutes.
When a corrections officer (Oscar Issac) is transferred to the “letter room,” he finds himself deeply enmeshed in some prisoners’ private lives. The film affirms that some in the prison system possess conscience and empathy while revealing the protagonist’s personal isolation and limited awareness of the lives of others.

COVID-19 SAFETY AT THE GARFIELD THEATRE

We have been dealing with the pandemic for one year and share a collective sense of relief as the vaccine rolls out. CWC remains cautious and will continue to put patron safety first.

The 2021 Oscar Shorts is a hybrid event. Based on your personal comfort level, you can see the shorts at the Garfield or you can watch them via the CWC Virtual Cinema. In-theatre capacity will be limited, based on regulations AND our own experience via multiple test screenings.

The first two weekends are allocated to those who have been vaccinated – PEACE OF MIND (VAXXER) WEEKENDS, April 9-10-11 and 16-17-18.
The third weekend is open to healthy people, with / without vaccination – OPEN WEEKEND, April 23-24-25.

Please understand that it is impossible to guarantee that you will not be exposed to Covid-19 when you attend in person and that by purchasing a ticket you voluntarily assume the risk. If you are not feeling well or think you have been exposed, please stay home and watch the Oscar Shorts online in our Virtual Cinema. 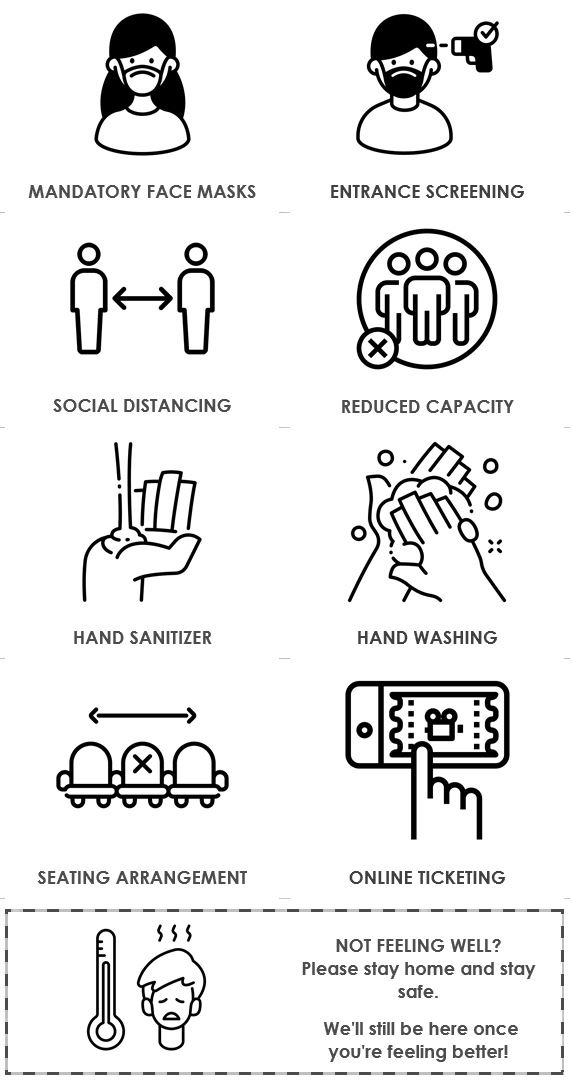 Thanks to O Cinema, Miami Beach, for the Covid Chart

SAFETY PROTOCOLS, from Butcher & Barrel management:
“We are providing table service ONLY, no bar seating, and all guests must remain seated at all times.  ALL GUESTS are required to wear face masks when they arrive, and while in any common spaces. In compliance with the most recent government guidelines, we cannot allow guests to wait for a table in common areas and reservations are accepted for groups of UP TO 10 guests ONLY.”