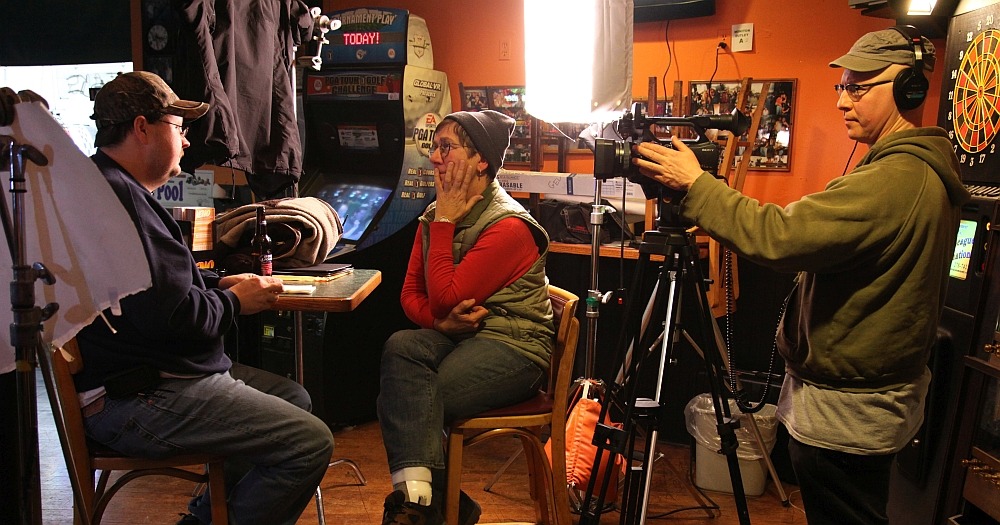 CWC is proud to collaborate with Women in Film Cincinnati in the presentation of a retrospective series that celebrates one of the most distinguished bodies of work in American independent film and one of our most accomplished documentarians, Julia Reichert.

Activist  Filmmaker  Educator  Mentor
Amazing is an over-used adjective, but in Julia’s case it is true. She has spent fifty years focused on social issues, class, gender and race in the lives of ordinary working people, mostly in Southwest Ohio.  Her films convey the march of history from the ’70s to the present, and are very much worth your time.

“As a filmmaker, she has demonstrated a career-long commitment to telling the stories of everyday people wrestling with forces often beyond their control.” — David Filipi, director of Film & Video with the Wexner Center for the Arts at The Ohio State University.

SCHEDULE & MORE INFO
Film synopses are in the tabs below the schedule.

All screenings start at 4:00 pm and include post-film discussion.

What, Where, When & How Much

WHAT:
RETROSPECTIVE: JULIA REICHERT – 50 YEARS IN FILM
Eight films shown one time each, spanning four Sundays in October and November.

WHEN:
In THE GARFIELD THEATRE

Julia Reichert is an Oscar and Emmy winning independent documentary filmmaker, and a four-time Academy Award nominee. She lives in Yellow Springs Ohio, and has chosen to focus on class, gender, and race in the lives of Americans, often ordinary working people in Southwest Ohio.

Growing Up Female (1971), Julia’s first film, was also the first feature documentary of the modern Women’s Movement. It was selected in 2011 for the National Film Registry of the Library of Congress.

Union Maids (1976) and Seeing Red (1983) were both nominated for Academy Awards® for Best Feature Documentary.

A Lion in the House (2006), (an ITVS co-production), about kids fighting cancer, premiered at Sundance, screened nationally on PBS, and won the Primetime Emmy for Exceptional Merit in Nonfiction Filmmaking.

Also nominated for an Academy Award® was The Last Truck – Closing of a GM Plant (2009), a short which premiered at the Telluride Film Festival and on HBO. Next came Sparkle (2012), about contemporary dance in Dayton, Ohio and Making Morning Star (2015), about opera in Cincinnati, Ohio.

American Factory 美国工厂 (2019), (a co-production with Participant Media), about the rebirth of a dead Midwestern factory, won the Documentary Directing award at Sundance, and the Spirit Award, the Gotham Award, the Cinema Eye Award & the Academy Award for Best Documentary Feature. It was the first film released by Higher Ground Productions, the production company created by Michelle & Barack Obama, and is on Netflix.

9to5 – The Story of a Movement (2020), an official selection of SXSW, Full Frame, AFI Docs and DOC NYC, tells the story of secretaries rising up and organizing to fight for their rights. The film premiered on the PBS series Independent Lens, was nominated for a Peabody Award, and now streams on Netflix.
~~~~~
Julia is co-founder of New Day Films, the independent film distribution co-op. She is author of “Doing It Yourself,” the first book on self-distribution in independent film, and was an Advisory Board member of the Independent Filmmaker Project. She co-wrote and directed the narrative fiction feature film Emma and Elvis.

Over the decades, Julia has mentored hundreds of emerging filmmakers. She taught for 28 years at Wright State University in Dayton, Ohio. In 2019, a retrospective of her work, Julia Reichert – 50 Years in Film, organized by the Wexner Center for the Arts, premiered at the Museum of Modern Art and traveled to a dozen cities across the United States.

Two days before Christmas in 2008, the General Motors assembly plant in Moraine, Ohio, shut its doors. 2,000 workers and 200 management staff were let go and related businesses were shuttered, resulting in thousands more displaced workers. But the GM employees lost much more than jobs – they lost the pride shared in their work and camaraderie built over years.
Events captured in the film serve as a harbinger of the cultural forces that would culminate in societal upheaval during later state and national elections.
Nominee, Academy Award for Best Documentary Short Subject.

In the shell of a huge, abandoned General Motors plant in Dayton Ohio, a Chinese billionaire opens a new factory, hiring 2,000 blue-collar Americans and hundreds of native Chinese. Early days of hope and optimism are truly tested by the scale of the project and by the cultural differences between high-tech China and postindustrial Midwest America. The filmmakers take us deep inside the story, and the plant itself, examining this collision of cultures and the future of both American labor and Chinese economic dominance.
Winner, Academy Award for Best Documentary Feature Film.

Told through the eyes of three remarkable women, Union Maids opens up one of the great untold stories in our history: the fight to form industrial unions in the first half of the 20th century. The film follows Stella, Sylvia, and Kate – all humorous storytellers – as they leave their small farms for promise of greater job opportunities in Chicago and eventually join the battle for better conditions for factory workers.
Nominated for an Academy Award for Best Documentary Feature.

Most everyone has heard the song “Nine to Five” by Dolly Parton or seen the 1980s blockbuster of the same name starring Parton, Lily Tomlin, and Jane Fonda. Yet few realize that these icons of popular culture grew out of a social movement that spanned over 25 years, seeking a profound impact on work for women, and the American workforce as a whole.

This illuminating documentary tells the little-known story, starting with a group of female office workers in Boston in the early 1970s – touching on still-relevant issues such as sexual harassment, pay equity, and the “glass ceiling.”

Considered both controversial and exhilarating on its release, Growing Up Female examines female socialization through a personal look into the lives of six women, ages four to 35, and the forces that shape them – teachers, counselors, advertisements, music, and the institution of marriage. The film was widely used by consciousness-raising groups to generate interest and help explain feminism to a skeptical society. It offers us a chance to see how much has changed as well as how much remains the same. Selected for the National Film Registry in 2011.

Sheri “Sparkle” Williams has been a star dancer with the legendary Dayton Contemporary Dance Company for nearly 40 years-a record unheard of in the professional dance community-and she is one of the few dancers outside of New York City to have been honored with the prestigious Bessie Award for Individual Performance. When this powerhouse dancer suffers her first serious injury, she’s forced to consider whether she has the will to return to the stage as her 50th birthday approaches.

Shot in Cincinnati, Making Morning Star presents a behind-the-scenes look at the joys and challenges of developing a new American opera. Featuring interviews with composer Ricky Ian Gordon, librettist William M. Hoffman, and director Ron Daniels, the film captures the delicate balance of personalities during an intense collaboration, unfolding in a workshop hosted by the Cincinnati Opera and the University of Cincinnati’s College Conservatory of Music. Will the opera be ready on time?

Seeing Red tells the forgotten history and adventures of ordinary Americans who joined the Communist Party and the high price many of them paid during the Red Scare in the 1950s. The film explores the ups and downs of the movement, noting lofty ideals affected by organizational failings (like all political parties).

Compiling more than 400 interviews with former and current party members, the filmmakers deliver an engaging, funny, and human portrait of 50 years of Red activism and attack. Among the stories are personal accounts from iconic folk singer Pete Seeger and a dozen other rank-and-file members that have special resonance in today’s political climate.

Nominated for an Academy Award for Best Documentary Feature.

Tremendous! Exceptionally well researched, fair and unbiased, it is a balanced and thorough look at the American Communist Party.
— Educational Film Library Association

A triumph! These aging radicals are the best advertisement for the spirit of survival.
— Richard Corliss, TIME 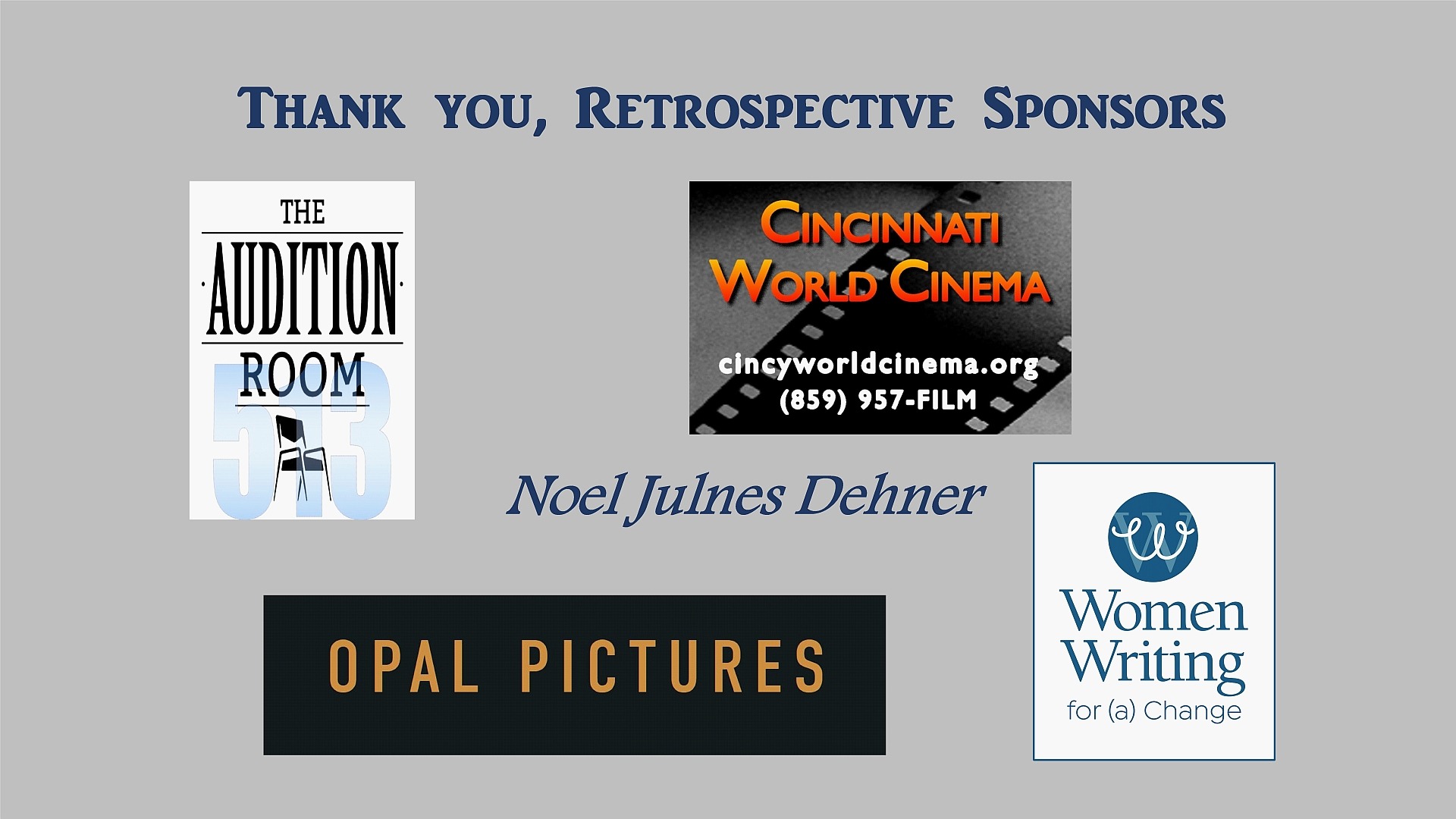 Our sincere thanks to our Retrospective sponsors:

Special thanks for their encouragement and assistance in making this possible:

Before, between or after films at the Garfield…

It couldn’t be easier – across the street from the Garfield Theatre, you’ll find the Butcher & Barrel, home of delicious shareables, salads, entrees, sides and desserts, plus excellent wine, craft beer and mixed drinks.

For CWC patrons, B&B offers a 15% discount on your order, excluding alcohol; menu is on the website. Reservations are strongly recommended, especially if you are dining between a CWC double feature. You should present your online confirmation or ticket from the event, and let your server know if there are time constraints. The discount is valid only for the date of ticket. 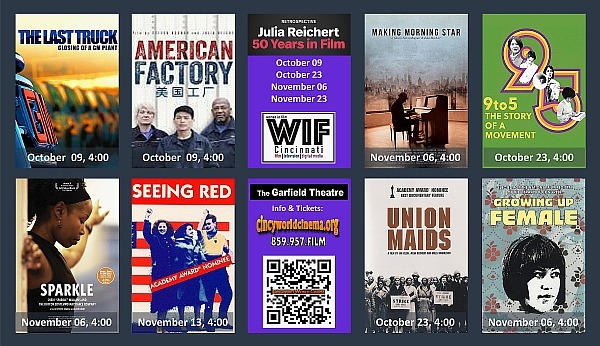