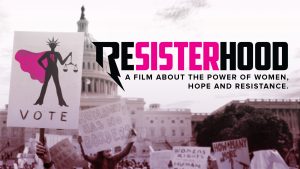 Resisterhood showcases the inspiring stories of six incredibly diverse patriots as they work tirelessly to enact change to protect our civil rights and to motivate others to do the same — activist leaders from the African-American, Latina, Muslim and LGBTQ+ communities. Through their eyes, we experience the reality of America as it is now … and through their actions during this extraordinary time — as they march, teach, speak, organize, run for office, even get arrested — we understand the strength and courage of ordinary citizens and that we all have the power to affect change.

“Resisterhood,” says director Cheryl Crim, “embodies the idea that when we join together to support and uplift each other, we are all better off. The character and diversity of the people profiled in the film are what is exceptional about America. We are the Resisterhood, ordinary people standing up in an extraordinary time, and that is what Democracy looks like today.”

Juxtapositioning brief media footage of Donald Trump — from his candidacy through his tumultuous White House residency — we are reminded why millions of people throughout the world took to the streets in protest on day one of his presidency and continue to demonstrate in earnest today, seeking equality, inclusion and true Democracy.

At the January 2017 Women’s March in Washington, D.C., we first encounter the subjects of Resisterhood, six American patriots who are fighting for social justice on the streets and in the halls of power. The film follows them as they work to protect our rights and inspire others to join this peaceful and momentous effort.
They come from all walks of life and have diverse roles in the movement: 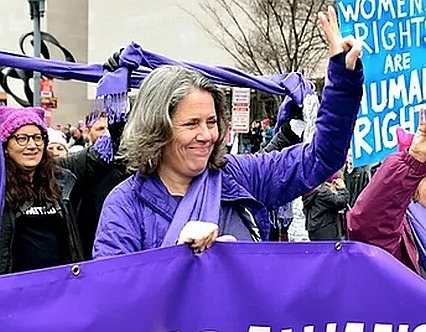 Dr. Jean Gearon, Ph.D., (The Organizer) is the great-granddaughter of a suffragist who participated in the original women’s march in 1913. Jean’s political awakening begins the moment Trump is elected. Calling on her friends, the psychologist fights back by transforming her eight-member book club into the 400+ member Women’s Alliance for Democracy and Justice. We watch this determined group of budding activists get involved in local and state politics as well as the fight to ratify the ERA – the same battle Jean’s great-grandmother fought more than a hundred years ago. 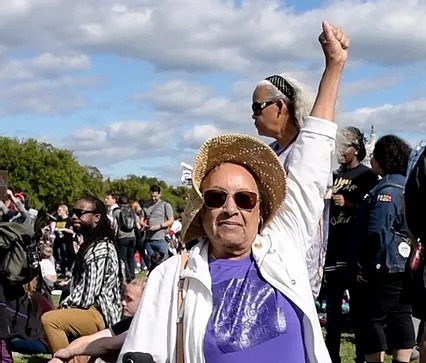 Margaret Morrison (The Marcher) is a seasoned activist who first marched from Selma to Montgomery alongside John Lewis and Martin Luther King Jr. in 1965. Now in her eighties, her legs are weak but her determination to stand for justice is stronger than ever and she has no plans of slowing down. She attends march after march, inspiring everyone around her including her 12-year-old grand-nephew, Dallas. Through Margaret’s eyes, we see decades of political activism and a determination to educate future generations about the need to stand against injustice. Interview with Margaret Morrison 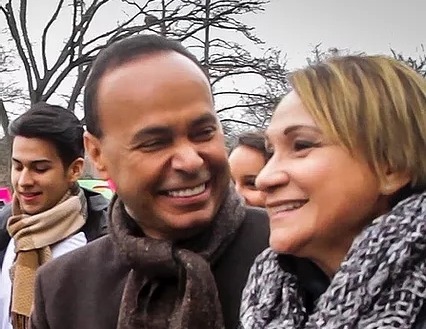 Luis & Soraida Gutiérrez (The Insiders), a U.S. Congressman from Chicago and his wife, fight for the rights of all Dreamers, and publicize the plight of immigrants and families separated at the border. Luis boycotted the 2017 inauguration and joined Soraida in the Women’s March. Their lifelong passion for equality motivates their daughter, Jessica Gutiérrez, to run for Chicago’s City Council. 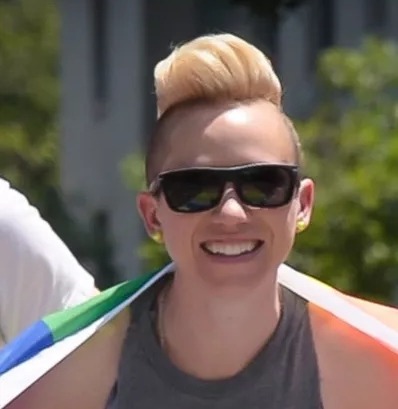 Joanna Lohman (The Motivational Speaker) is a professional soccer player nicknamed the “Rainbow Warrior.” After a season-ending injury, Joanna uses this setback as an opportunity to transform herself into a role model, activist and motivational speaker, standing up for gender equality and the rights of the LGBTQ+ community. We join her as she marches with Athlete Ally, a group of professional and Olympic athletes. We chant with her as she officially starts the second Women’s March from the steps of the Lincoln Memorial. And we bask in Joanna’s unbridled optimism and unapologetic joy as she inspires everyone she meets. 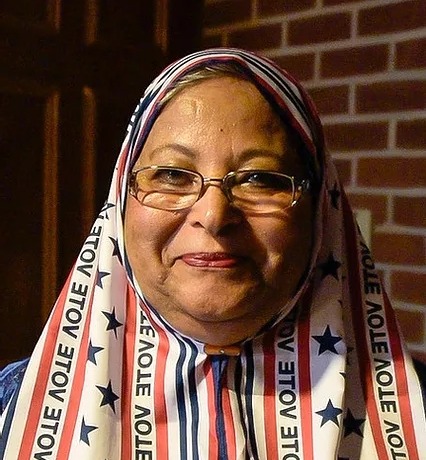 Mimi  Hassanein (The Candidate), a woman of Egyptian heritage who became a victim of hate speech after the presidential election because she wears a hijab. She turns her fear into power as she runs for public office, with the support of her large family, including 15 grandchildren. We follow her journey through campaigning and elections, as she rides the wave of women elected to office with the hope of changing the face of politics in this country. 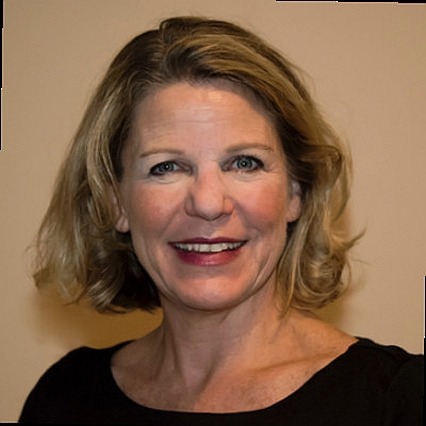 Cheryl Jacobs Crim is an independent filmmaker who has been telling compelling and provocative stories for television and film for three decades. She has produced, directed and edited numerous television specials and documentaries and won dozens of regional, national and international awards including two Silver Telly’s, a Gold Medal from the NY Film Festival and “Best of Show” from the Houston International Film Festival.  She also received 12 Regional Emmy’s for Outstanding Specials and Documentaries including two for Individual Achievement in Directing and Editing.

Cheryl has local roots. Daughter of an Air Force family stationed at Wright Patterson AFB in Dayton, she is a Phi-Beta-Kappa graduate of Miami University with a B.S. in Mass Communications and Broadcast Journalism. Her first position was in Cincinnati, producing videos at Procter & Gamble corporate headquarters. Next, she spent four years at WCPO-TV, producing, directing and editing local television specials.

Opportunity took her to the East Coast, working in broadcast and series production for the New Jersey Network, New York Television and as a freelancer.  After a stint in Europe, Cheryl located in the Washington, D.C. metro area, founding Unshakable Productions working primarily with schools and nonprofits. Cheryl says her “activist soul” led her to produce, direct and shoot Resisterhood. Her filmmaking team on the project included co-producer and lead editor Pippa McBride and editor Paige Lee Smith.

“Resisterhood is meant to highlight the power of women, hope, and resistance in American politics. It succeeds at these goals and chronicles the grinding nonstop gut-punches we’ve endured for four years, each day bringing another outrage, until our senses are overloaded, and our capacity for outrage dulled. The stories in the film are optimistic and look to the future. Crim reminds us that good people are still out there, swinging for the fences.”  — Bradley Gibson, Film Threat

“…while Resisterhood is steeped in the culture surrounding our current political climate, it has a timeless message. If you want to effect change, you must participate. If you need a reminder that your vote, your voice matters, start with Resisterhood.”  — Rachel Willis, Maddwolf

“We see all of the resisters at march after march, growing stronger and more determined, as the film cuts between them and the outrages they are protesting. It’s a harrowing look at just the first two years of 45’s administration and reminds you of how much damage was done and how quickly.  It’s the kind of film that would get people out of their seats and into the streets, if the pandemic wasn’t keeping them indoors. But it will make you want to do something now, whatever you can, to be a part of the resistance. And to vote like your life depended on it. It does!” — Jill Boniske, ChickFlix 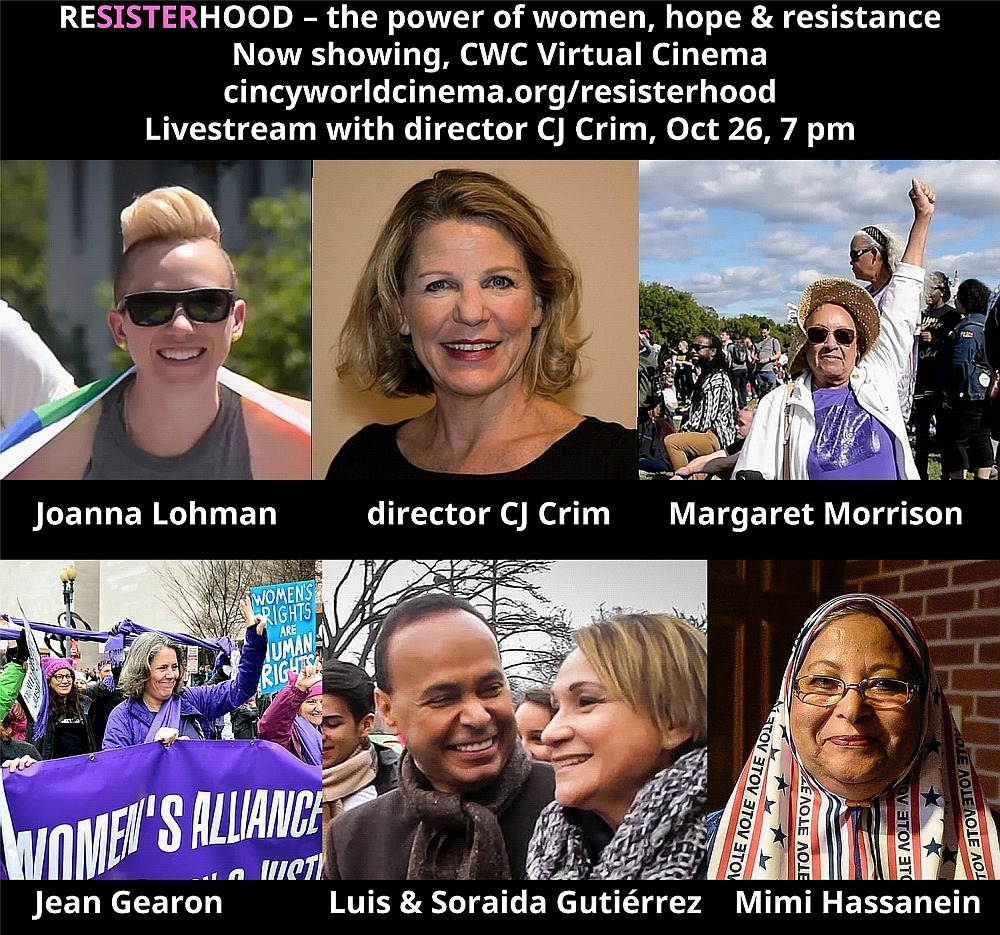