“The best film noir I have ever seen.”
— Francois Truffaut

Whether or not you are a “noir” fan, Rififi’s white-hot suspense seamlessly crackles with excitement – revealing the real Paris – shot on the streets during wind and rain, the perfect compliment to Dassin’s believable characters – noble, tragic, warm, flawed and human.

In his essay for Criterion, Jamie Hook shares why Rififi is a terrific viewing experience:

Part of the key to Rififi’s genius is that no single element outshines another. Like a diamond, each facet of the film gleams as brightly: The performances, especially Jean Servais’ minimalist take on the dog-eared protagonist Tony and Dassin’s own lighthearted portrayal of the safecracker Cesar le Milanais (under the pseudonym Perlo Vita), are quite excellent. The cinematography is stunning, particularly the nighttime shots, where we see the shape of Tony’s hat laid against the smears of neon that pulse in the city streets behind him. The music, by famed composer Georges Auric, is dead on, restrained and somber, occasionally breaking into dance.

The plot is an economic wonder: three succinct acts that unfold with the dedication of an opera, building to a glorious, dramatic finish. And the sets, by the great designer Alexandre Trauner (who had worked on Children of Paradise), manage to hold their own against Dassin’s obsessively and lovingly researched street locations. The interior of the obligatory gangland nightclub (named “L’Age d’Or” in homage to the Buñuel film) is especially handsome, its definitive architecture piling the requisite layers upon layers—like the ballroom leading upstairs to the gangster’s office, which, of course, has a back door that takes us to the dreamland of backstage. Only the gorgeous Parisian locations—the train station and assorted back alleys—threaten to outshine Trauner’s lovely sets.

And yet, even in a film of such generous superlatives, something does stand out, towering over it all. For Rififi is that most hallowed of films, a film that contains a monument within. Like the Grand Hall ball in The Magnificent Ambersons or the pickpocketing sequence in Pickpocket or the crop-duster chase in North by Northwest, the virtually silent, gleefully long heist scene at the center of Rififi is a tingling, ecstatic, sustained act of brilliance. For an astounding 33 minutes, Dassin removes all dialogue and music, hushing the soundtrack to the mere sounds of breath—as we observe the criminal team at work, breaking through the floor, silencing alarms, cracking safes, checking watches, and signaling each other.

It is a scene you’ve seen before (imitators have been cannibalizing it for decades), but you will never see it so purely, respectfully done as here. The fetishistic shots of the safecracker’s tools, the rope that comes out of the suitcase already knotted and ready for climbing down, the team’s proprietary language of hand-gesture, the justly famous conceit of the umbrella—all of these elements are so lovingly described, it makes you want to cry out.

But it is the simple image of the men working together that binds it all. The film may be about crime, but at its heart, Rififi reveals itself actually to be a paean to work—not the drudgery of labor, but the poetic “Love Made Visible” that Khalil Gibran once described. In these 33 glorious minutes, we see our heroes as they were meant to be: working together. 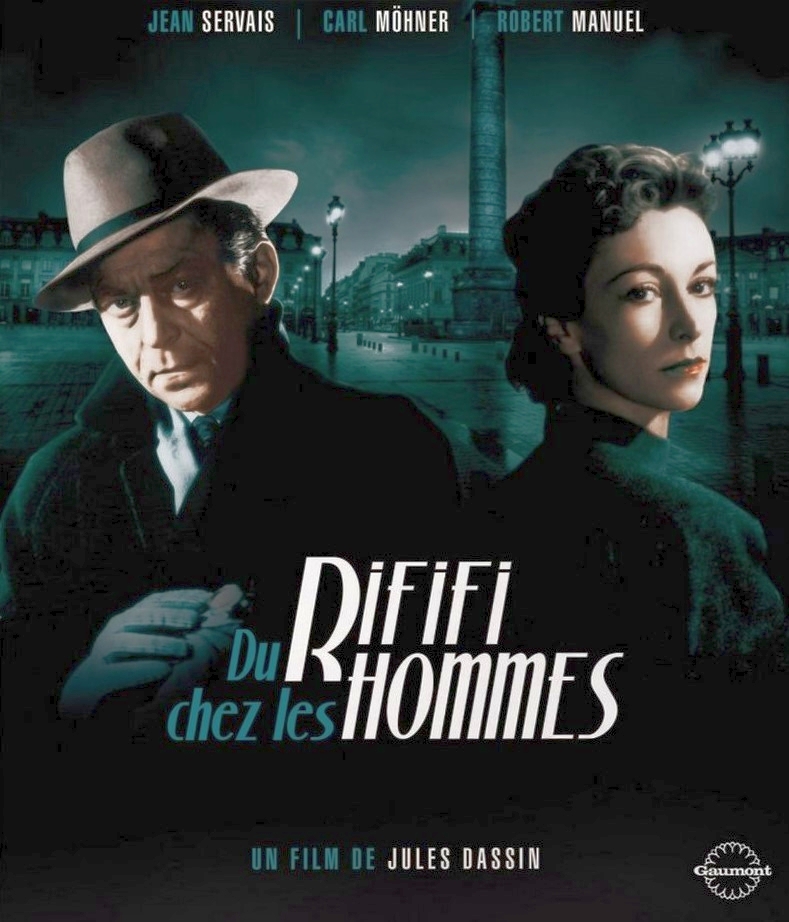