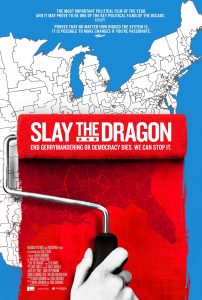 “This film should be a lesson that
the will of the people will eventually
prevail, even if all seems lost.”
— Matt Cohen, Washington City Paper

Tickets are only $6.99. Get yours now, organize watch parties and then contact us about online post-film discussion.  A portion of the rental proceeds will come to Cincinnati World Cinema – we appreciate your support and ask that you share this webpage with others who care.

This timely documentary stands out for several reasons. Normally we see political films present a list of issues and then fall short on offering fixes. Slay the Dragon is different – it identifies and discusses practical solutions, creating a working blueprint used in the film and for others to follow going forward.

Further, we actually see everyday people taking action to implement common sense solutions to the problem of gerrymandering – the practice of redrawing electoral boundaries to favor the party in power.

Gerrymandering has been part of political life since our country was founded, but after the 2008 election, a well-funded, secretive, high-tech initiative was mounted to deprive the American people of equal representation. The result was the stacking of state legislatures to enact policies that drive out Democratic and minority voters.

After an initial informative mode, the film focuses on Katie Fahey, who founded a Michigan grassroots activist group dedicated to putting redistricting back in the hands of the people and restoring fairness to our elections.

Slay the Dragon will engage and enrage – bringing real-life drama and suspense to an incredibly important and timely issue for our democracy. This must-see doc is both informative and inspiring – chronicling the civic grit that is turning the tide in swing states in the battle for the legitimacy of U.S. democracy.