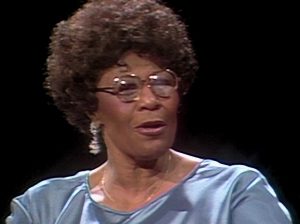 I remember Ella Fitzgerald when she joined the Cincinnati Pops Orchestra to headline the grand opening at Riverbend Music Center on July 4, 1984.  We were there – part of over 10,000 attendees celebrating Ella and the Pops in their brand-new outdoor home – Tim’s business handled sales for the Pops and the Symphony, so we had primo seats front and center!

I grew up listening to her music, my father’s two favorite singers were Ella and Dinah Washington, and the opportunity to see her in person was something I had never anticipated.  Her performance was great and as noted in the next day’s review in the Cincinnati Enquirer she “won over the crowd with her warm wit and two sets of her classic tunes.”

The new documentary about Ella

We are thrilled that CWC is streaming Ella Fitzgerald: Just One Of Those Things. It opens June 26, you can pre-order and also give it as a gift.

☀ The trailer and documentary are available online here.
☀ Register for the 7 PM June 28 livestream discussion here.

This film is satisfying in so many ways – a musical anthology, a fascinating biography and a history of the times – something you’ll want to watch more than once and share with your friends.

In addition to Ella’s unique and amazing interpretation of the American Songbook, this documentary helps us better understand her life journey.  Current events are leading us to recognize and deal with the systemic racism in our society, and here we learn that in her six-decade career Ella faced persistent discrimination in her personal and professioal life, but found a way to overcome many obstacles and leave us with a legacy of song that enriches our lives.

New Material in the Ella film

Here is an Ella the world never knew – tough, thoughtful, funny, a dazzling musical innovator. The film also uncovers Ella’s commitment to the battle for Civil Rights; and it explores the conflicts that always haunted this intensely private woman: the struggle to reconcile her hunger for adoring audiences with her longing for a domestic life with her husband and son. At a time when she was the biggest singing star in the world, her pianist and friend Oscar Peterson said Ella was “the loneliest woman in the world.” But as Jamie Cullum says “her music is one of the reasons it’s worth being on this planet.”

In an interview never made public, Ella speaks out frankly about race in America and her anger over the impossibility of taking her music into the segregated South. “This is unusual for me. I got a few things off my chest. I really ran my mouth off.”  She also opens up about the difficulties of reconciling her endless touring and her yearning for a family life. “I’ve got this big house, but a house isn’t a home without a man.” She calls her musicians “her family.”

The film has an extended interview with Ella’s son Ray Brown Junior. He talks movingly about the pain of their regular separations when she was touring the world and he was sent to a Catholic military academy where there was one other black kid among 200 students. He also talks about coming home for Ella’s final months and reconciling with her after years of separation.  Home life with Ella and Ray is vividly recorded in intimate photographs, previously unseen and discovered for the film.

Dancer Norma Miller (who we met in CWC’s “Alive and Kicking”), now 100 years old, talks about seeing the 16 year old Ella in a Harlem Apollo talent show, “We booed her because she was somebody we didn’t know.” But when Ella sang “She shut us up so you could hear a rat piss on cotton.”  Norma talks about the apartheid racial realities of daily life for kids like her and Ella.  “Everything was race” she says. Norma also described working with Ella in the 1930s as they toured the south with the Chick Webb band. “She was not cultured. She wanted to escape the life that she had.”

Tony Bennett reveals personal memories of Ella’s passion for performing. “I met her rushing through the airport when she was supposed to be ill. She couldn’t wait to get on that stage to get that audience.”  We also hear from others who knew Ella – Johnny Mathis, Smokey Robinson, Cleo Laine, Andre Previn, Patti Austin, Itzhak Perlman, Margo Jefferson and Will Friedwald.

Ella Fitzgerald: Just One Of Those Things is satisfying in so many ways – a musical anthology, a fascinating biography and a history of the times – something you’ll want to watch more than once and share with your friends.