“If You Could Read My Mind”

GORDON LIGHTFOOT:
“If You Could Read My Mind” 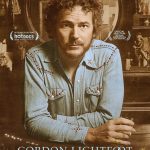 Watching If You Could Read My Mind, we see the reasons why Gordon Lightfoot is considered the greatest singer-songwriter in Canadian history, in the company of  Joni Mitchell and Leonard Cohen.

His words are sensitive poetry, his ballads tell stories that capture your heart. His silky baritone exudes emotion. His musicianship and arrangements are exquisite.

The documentary’s flow is not strictly linear but arranged around some of his most important songs and life events. It artfully melds a look back over time combined with the present-tense sensibility of a man in the late stages of life. Overall, the film nicely covers the three main elements of an arts documentary.

1. It celebrates the art form – his writing, composition and music, through a generous array of Lightfoot performances, giving us the best of his repertoire when he was at the top of his game. The film’s best moments are experienced by letting the music speak for itself — something his fans and music lovers in general will appreciate. “Canadian Railroad Trilogy,” “Sundown,” “For Lovin’ Me,” “If You Could Read My Mind,” “The Wreck of the Edmund Fitzgerald” and dozens more. We also see his original composition sheets, meticulously notated, conveying his creativity and work ethic.

2. It connects us with the artist, telling us things we don’t know, in conversation with Lightfoot himself.  We learn about the things that matter to him, about his mistakes and regrets in life – an approach to candor not always seen in biopics. He discusses his heavy drinking and recovery, the aneurysm and subsequent coma that almost ended life, as well as his sense that he’s mastered the process of aging.  And there are his early days spent writing hits for other stars, the folk club scene in Canada, New York and California, hangin’ with Joni Mitchell, Bob Dylan, et. al. And of course, the touring that dominated his life.

3. And yes, the requisite talking heads – peers and luminaries weighing in on the artist’s significance. I’ve always thought that less is better in this category but found it worthwhile in this film because of the way useful commentary is mixed with the music. 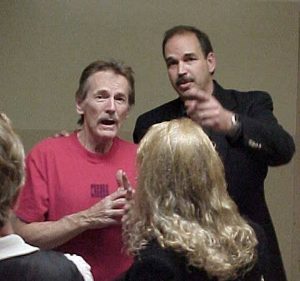 Visiting with Gord backstage at the Aronoff, 2012

Celebrating Gordon Lightfoot
Back in the 1970s and ’80s, I was working with a local promoter, which included producing a half-dozen Lightfoot concert dates at Cincinnati Music Hall, the U.C. Armory Fieldhouse and Dayton Hara Arena.

Working with Gord was always a genuine pleasure, not just for his music, but because of his dedication in connecting with the audience and presenting the best possible concert. His band members were consummate professionals with decades by his side — road manager Richard Harrison, Terry Clements on lead, Rick Haynes on bass, Pee Wee Charles on pedal steel, Barry Keane on drums, and joining in 1981, Mike Heffernan on keys.

Back then, thousands of people fell in love with Lightfoot’s music.
Now, it’s a thrill to share his history, music and concert performances with you, in the new documentary, “If You Could Read My Mind.”

Biographer Nicholas Jennings on his legacy:
“His name is synonymous with timeless songs about trains and shipwrecks, rivers and highways, lovers and loneliness. His music defined the folk-pop sound of the 1960s and 1970s.”

Capturing the majesty of Canada:
“There was a time in this fair land when the railroad did not run.
“When the wild majestic mountains stood alone against the sun.
“Long before the white man, and long before the wheel.
“When the green dark forest was too silent to be real.”
— from The Canadian Railroad Trilogy

Sharing personal heartbreak:
“If you read between the lines you’ll know that I’m just trying to understand — the feelings that we lack.
“I never thought I could feel this way and I’ve got to say that I just don’t get it.
“I don’t know where we went wrong but the feeling’s gone and I just can’t get it back.”
— from If You Could Read My Mind

Rick Beato breaks down “If You Could Read My Mind”